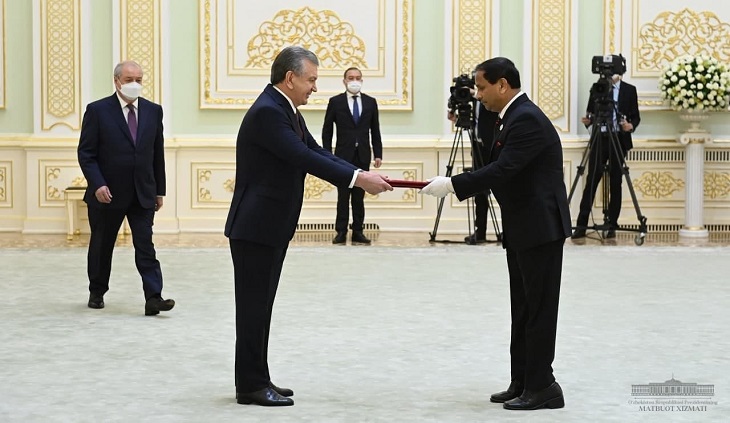 Ambassador of Bangladesh to Uzbekistan Md Zahangir Alam presented his credentials to President of Uzbekistan Shavkat Mirziyoyev on Friday (April 23).

On the same day, Ambassadors of the Czech Republic, Egypt, Jordan, Turkey, the European Union and Russia to Uzbekistan also presented their credentials. Due to Corona Pandemic the ceremony was held on a limited scale.

The Ambassador of Bangladesh assured to take appropriate steps in this regard and briefed the President on Bangladesh's success in RMG, textile, pharmaceuticals, jute and jute products and leather sectors.

The Ambassador requested the President to establish the Embassy of Uzbekistan in Dhaka and resume the direct passenger flights Dhaka-Tashkent-Dhaka route to enhance bilateral communication in the fields of tourism, education, sports and culture between the two friendly countries.

He sought the assistance of the President to make the first Foreign Office Consultation (FOC) meeting to be held on May 27, 2021 fruitful.

In this regard, the President of Uzbekistan requested Foreign Minister Abdulaziz Kamilov, who was present there, to open a Consulate of Uzbekistan in Dhaka initially and to make the first FOC meeting between the two countries effective.

He assured, necessary steps would be taken after examining the issue of direct flights.