Domingo sets 520 runs in mind to put hosts under pressure 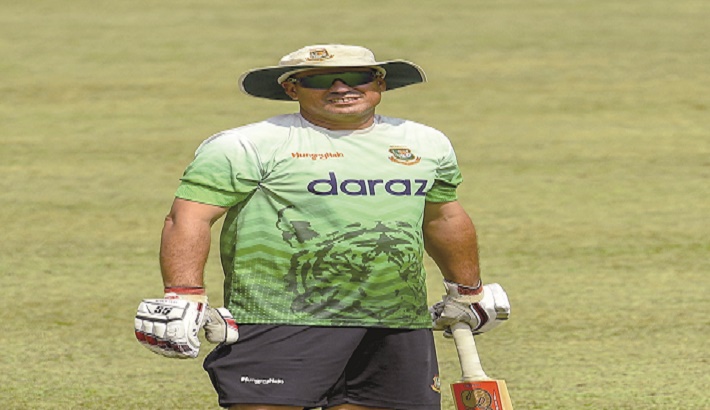 Bangladesh head coach Russell Domingo on Thursday said that they would be looking to score around 520 runs in the first innings to put the opposition under pressure in the first Test in Kandy of Sri Lanka.

The Tigers reached 474-4 in their first innings after the second day’s play was called off early due to bad light.

Mushfiqur Rahim and Liton Das were looking to get a move on late on the day but first a brief rain interruption and then a loss of light meant they had to end the day’s play unbeaten on 43 and 25 respectively.

“We will make up some time over the next three days. I don’t think any more overs will be lost in the game. We will discuss it overnight but we need to get some quick runs tomorrow morning. If we can get around 520, it gives us a good opportunity to put them under some pressure,” Domingo told reporters in a virtual press conference.

“I am not relieved but I know our guys can play. We have some quality batters on our side. They have found a way to score runs on a good pitch. I am really happy for the boys.

“They have taken a lot of criticism over the last couple of weeks. They have come back and put in a big performance in foreign conditions. They were positive and hungry and worked really hard. Some of them got good rewards in this Test thus far,” he said, adding that they are not thinking too far ahead.

“Winning the Test is a long way away. It is not something we are thinking about at the moment. Our main focus is to play well in the first session tomorrow. There’s a lot of hard work ahead of us to even consider thinking of winning this Test,” he said.

Although the wicket helped the batsmen in the first two days, Domingo believed that their spinners could play their part as they already created scoreboard pressure on the hosts.

“We know it looks like a good wicket but the amount of heat that’s been on it, there’s a bit of a rough developing outside the right-hander’s off-stump. Hopefully, our spinners can come into it.

“Batting second after a big score, there’s always a little bit of tiredness. There’s scoreboard pressure. It takes one or two mistakes, a couple of good spells from one or two bowlers, and you have got a real chance of taking 20 wickets.

“We know it will be hard for the next couple of days but we are willing to put in those big sessions, be patient and find ways of getting wickets on a good batting wicket,” he added.

Domingo also credited Najmul and Mominul for their fantastic hundreds that laid the foundation for the Tigers in the contest.

“He (Najmul) has played a fantastic innings. I am really pleased with him. He has worked really hard on his game in the last couple of months,” said Domingo.

“I think Mominul understands his game really well. He is a very calm person. I think his demeanour lends him to be a much-organised Test batsman. He is meticulous in his preparation,” he added.