Shakib's KKR fail to close the deal against Mumbai 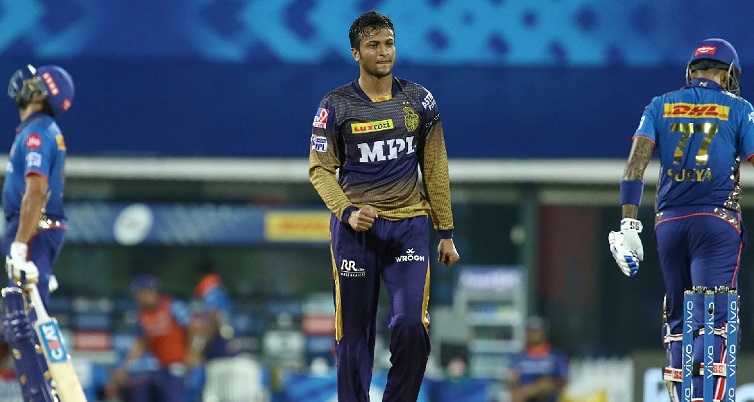 Bangladesh allrounder Shakib Al Hasan bowled well for Kolkata Knight Riders on Tuesday when they took on Mumbai Indians in their second game of the Indian Premier League (IPL) 2021. KKR, however, lost the game due to careless batting during the last five overs of the game- and there Shakib must share in the blame. Some might say he even started it.

KKR won the toss and opted to bowl first against Mumbai who lost the first game of the season to Royal Challengers Bengaluru. KKR, on the other hand, came to his game with a win in their first game to Sunrisers Hyderabad.

Andre Russell bagged five wickets for KKR conceding only 15 runs in two overs, and thus, he was the best bowler of his team while Shakib bagged one wicket conceding only 23 runs in four overs. Shakib’s economy was 5.75, the lowest for KKR’s bowlers who have bowled all four overs in this game.

For Mumbai, Suryakumar Yadav hit 56 off 36 before Shakib sent him back while Rohit Sharma posted 43 off 32 balls. Mumbai scored 152 for all wickets in 20 overs.

In reply, Nitish Rana and Shubham Gill posted 72 runs in the first wicket stand, and it looked like KKR will have an easy win. But the failure of the other batsmen made it tough for them.

Rahul Chahar bagged the first four wickets of Kolkata conceding 27 runs in four overs. Shakib got a promotion in the batting order, coming to bat at number five. But the left-hander failed to exploit the chance as he fell for 9 off 9 deliveries.

In the last five overs, KKR needed 30 runs with six wickets, including Shakib, Russell and Dinesh Karthik, in hand, but they failed to do it.

They lost Shakib during the 16th over while in the last over when KKR needed to score 15 to seal the game, Trent Boult removed Andre Russell, 9 off 15 balls, and Pat Cummins off two consecutive deliveries. Karthik remained unbeaten at 8 off 11 balls.

And eventually, KKR tumbled for 142 for seven in 20 overs and lost the game by 10 runs.