China is building more underground silos for its ballistic missiles 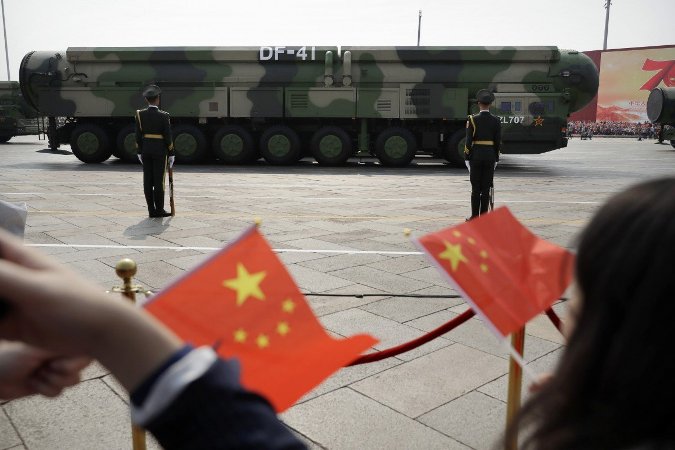 China is building more underground silos from where its most powerful intercontinental ballistic missiles could be launched, according to reports.

It said that as military rivalry with the US intensified, China was moving to expand its nuclear deterrence strategy and the missile silos were part of that.

China’s DF-41 missiles can carry multiple nuclear warheads and can be fired from a silo-based platform or a road- or rail-based mobile launcher.

The new underground silos are located in the centre of the Jilantai training base, within a total area of 200 sq km, and are spaced between 2.2km and 4.4km apart so that no two of them can be destroyed in a single nuclear attack, according to the report.

Beijing’s official policy is that it will not be the first to use nuclear weapons in the event of a conflict, but it also stresses the need for nuclear deterrence and the ability to respond to a nuclear attack.

The US Department of Defence said in its 2019 annual report on Chinese military power that it assumed China was considering additional DF-41 launch options including rail-mobile and silos. In 2020, its report said the Jilantai training base was “probably being used to at least develop a concept of operations for silo-basing” the DF-41 missiles.

But the FAS report said even if China doubled or tripled the number of ballistic missile silos, it would still lag far behind the US and Russia in terms of nuclear strike capability. The US has 450 silos, 400 of them loaded with missiles, while Russia has about 130 active silos, compared to 18 to 20 active silos in China, according to the FAS.

It also said satellite images of the Chinese training base showed that two drive-through tunnels had been built, with enough space to accommodate mobile missile launchers – meaning they could be kept hidden.

“Using silos is the most reliable counterstrike method, but these facilities are also key bombing targets for rivals because they’re easier to spot using satellites,” Wong said. “These ground-based facilities need to be supported by mobile launchers.”

Launching missiles from silos is the most reliable and precise way to hit a target, and the new facilities were built for the rocket force’s new DF-41 brigade under the Western Theatre Command, according to an article posted on Monday to Weapon Station, a military analysis account on social network WeChat.

“Increasing land-based ICBM silos is part of China’s efforts towards the nuclear triad of ground-based ICBMs, submarine-launched missiles and air-launched weapons,” said Song, a former instructor with the PLA’s Second Artillery Corps, the predecessor of the rocket force.

“The ultimate goal is to boost nuclear deterrence.”