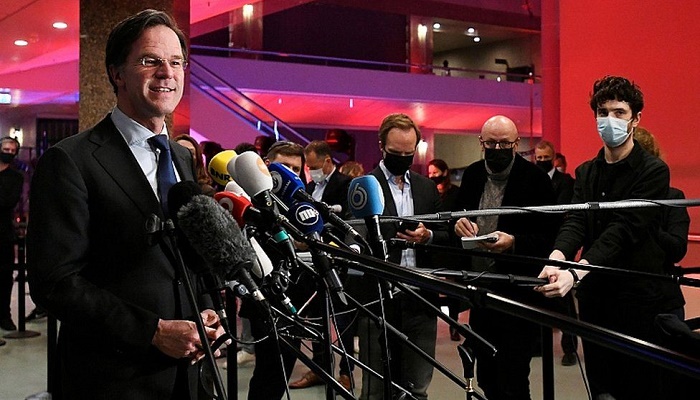 Victory hands Mr Rutte a mandate to form a new coalition government led by his centre-right VVD party, with a fourth term as prime minister.

His last government resigned in January over a child welfare fraud scandal.

While his party was set to win 35 out of 150 seats, the centre-left D66 was the other big winner of the night with 24 seats.

"The voters of the Netherlands have given my party an overwhelming vote of confidence," Mr Rutte told reporters in parliament.

He conceded that "not everything has gone well in the last 10 years" but said the main challenge was to rebuild the country after the Covid-19 pandemic.

"I have the energy for another 10 years," he said. The two parties that currently form a caretaker coalition with his liberal VVD are likely partners in a new government, but the support of the liberal D66 and the CDA are not enough to form a majority. The coalition process could go on for some time.

After finding out that D66 had come runner-up, party leader Sigrid Kaag jumped on the table with happiness. "What a wonderful evening," she tweeted. "Now let's get to work, the future won't wait."

She told reporters voters were ready for "the optimism and vision" of her party. "This evening it's been confirmed that the Dutch are not extremists, but are moderate. People appreciate positivity."

Geert Wilders, head of the PVV, said he had "hoped for more than 17 seats" but pledged that his party's "counter-voice" would be heard from the opposition. Another far-right party, Forum for Democracy, was set to have eight seats, despite an anti-Semitism row in the run-up to the vote.