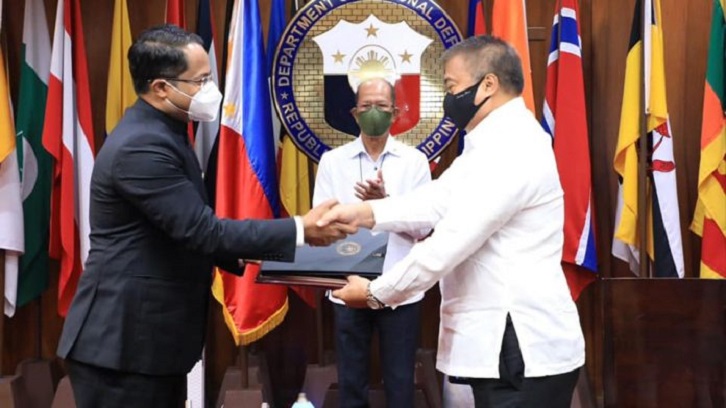 The deal was signed by the two countries at Camp Aguinaldo, headquarters of the Armed Forces of the Philippines Tuesday | Facebook

India and Philippines have signed a key enabling pact that will pave the way for government-to-government deals on defence equipment including the supersonic BrahMos cruise missile in the future.

The ‘Implementing Arrangement’ concerning the procurement of defence material and equipment was signed by the two countries at the Camp Aguinaldo, headquarters of the Armed Forces of the Philippines Tuesday.

Sources in the defence and security establishment told ThePrint that this does not mean that the much awaited BrahMos deal is happening anytime soon.

They explained that the agreement involves the procurement of defence equipment by the Philippines from India.

“This is sort of a foundational agreement for government-to-government contracts. This does not mean that a contract for BrahMos is being signed,” a source said.

The Straits Times quoted the Philippines Defence Secretary Delfin Lorenzana, who witnessed the signing ceremony, as saying, “We are buying the BrahMos missiles.”

Lorenzana said the agreement served as a guide for the Philippines and India on “policies and procedures in the defence procurement”.

It also served as a “legal framework for the procurement under the government-to-government modality,” he added.

Plans for the possible sale of the Indo-Russian BrahMos supersonic cruise missiles to the Philippines had hit a roadblock in December last year with Manila citing budgetary limitations caused by the Covid-19 pandemic.

Roman Babushkin, the Deputy Chief of Mission at the Russian Embassy in India, had earlier said in December that the Indo-Russian joint venture (JV) firm — BrahMos Aerospace — is looking at exporting the weapons to other countries, starting with the Philippines.

ThePrint had then reported that the Russian statement had come as a surprise to the Indian security and defence establishment, because while talks were underway with the Philippines, the modalities were yet to be worked out.

BrahMos is the only supersonic cruise missile in the world that flies at three times the speed of sound (2.8 Mach). It is much sought-after because it can be used for both coastal defence and ground attack.

India had offered a $100 million line of credit for the purchase of the weapon.

While India is working to extend the range of the BrahMos missile, the version that will be exported will come with a “normal range” of 290 km.