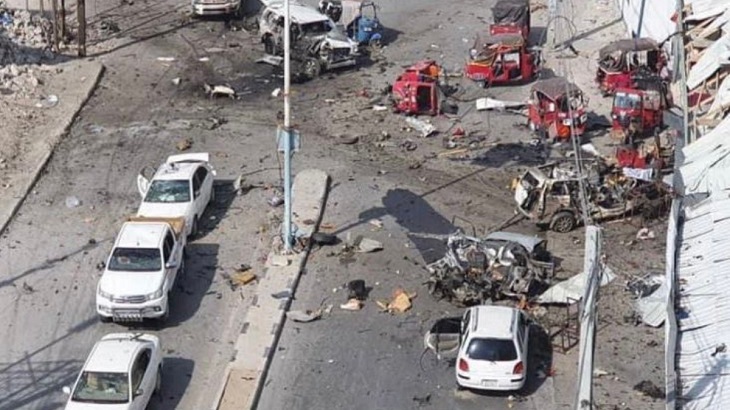 Three people were killed and eight wounded after a car bomb detonated near a security checkpoint in the Somali capital Mogadishu Saturday, a security official and witnesses said.

"The police were chasing the hostile vehicle after spotting it a few kilometres away from where it exploded," the official, Abdirahman Mohamed, told AFP.

"Three civilians died according to the information we have received so far and eight others are wounded," he said.

"The police opened fire on the vehicle and chased it and this allowed many people to flee. This has really limited the number of casualties the blast could have caused."

Witnesses said they heard gunfire and saw vehicles including three-wheel tuk-tuks scatter before the heavy blast occurred on a key road.

"I was at a gym close to where the blast occurred, but thanks to God we have heard the gunshots before the blast. And this alerted many people including myself and we fled from the area to take cover before the vehicle reached the area of the explosion," said one witness, Dahir Osman.

A police statement said there had been no deaths, only seven wounded in the blast which destroyed eight cars and nine tuk-tuks. However witnesses contradicted this.

"My uncle was among the dead, I went there to collect his body and I saw another civilian who died in the blast as well," said Suleiman Ali.

The Somali capital is regularly targeted with attacks by the Al-Qaeda-linked Al-Shabaab group who have been waging a long and violent insurgency seeking to unseat the internationally backed government.

They were driven out of Mogadishu in 2011, but still control swathes of territory from where they plan and launch frequent, deadly strikes against government and civilian targets.