Tigers look for a turnaround 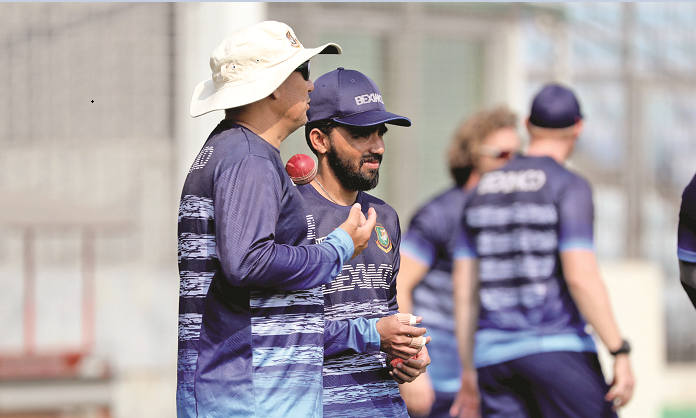 The injury-ravaged Bangladesh are eyeing to restore pride as they prepare to take on a high-flying West Indies in the series-deciding second Test at the Sher-e-Bangla National Cricket Stadium in the capital.

The match will start at 09:30am and will be telecast live at T Sports and Nagorik TV.

Bangladesh, who outclassed the visitors in the three-match ODI series, were brought down to earth after West Indies handed them a three-wicket defeat in Chattogram on the back of a remarkable comeback on the fifth day.

The hosts had stepped into the series as the favourites but are currently trailing the series 0-1 courtesy to Kyle Mayers and Nkrumah Bonner, who turned out to be heroes on debut.

The duo had magnificently pulled a comeback for the visitors on the final day of the first Test in Chattogram and helped the visitors chasing 395 runs in the fourth innings, highest by any team in Asia.

Bangladesh received a massive blow when their ace all-rounder Shakib Al Hasan was ruled out before the crucial Test for having a strain on his left thigh while the hosts received a fresh setback as opener Shadman Islam was sidelined due to a hip injury.

BCB didn’t make any formal replacement for Shadman, who made a half-century in the first innings of the first Test and looked to be in good touch.

BCB, however, replaced Shakib with Soumya Sarkar and the left-handed batsman had a long session in the nets on Wednesday to get prepared for the second Test as he is likely to open in place of Shadman.

“It’s not as simple as it seems, as replacing someone like Shakib bhai is a huge thing. You need a batsman and a bowler to replace such an all-rounder in the team so we are trying our best,” Bangladesh Test skipper Mominul Haque said before the Test.

“It all depends on the mindset because we have won matches without him while we lost games despite his availability. We have to play with our available resources and Shakib bhai being such an ace cricketer for our country, not having him is a big loss for us. But I’d like to go with whatever I have within my reach,” he added.

The SBNCS conventionally serves the spinners more and Bangladesh will look to venture their strongest part.

According to team management, Abu Jayed is expected to take the new ball in place of Mustafizur Rahman while to bolster the batting strength Mohammad Mithun is expected to replace Shakib.

There can be an inclusion of the second pacer but the spin trio - Mehidy Hasan, Taijul Islam and Nayeem Hasan will have to get to their tempo right.

Mehidy was the best performer for the home side as he picked up eight wickets along with his maiden hundred in the first Test while Taijul and Nayeem are expected to contribute more.

“The bowling combination will depend more on the condition and we will have to decide before the start of the game. We will play spinners more in the XI if we find the wicket will not serve the pacers,” said Mominul.

“We have to make a turnaround if we want to save the series.  We have to bat well, bowl well and field well. Hopefully, we’ll come up with our best in the second Test,” he added.