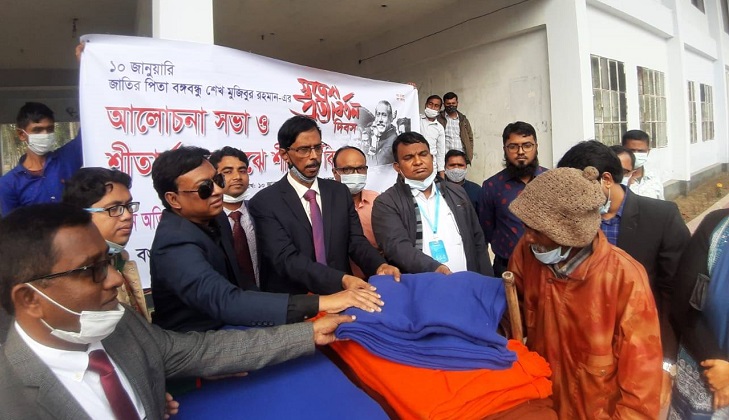 The day’s program started with hoisting of the national and the university flags at the varsity Administrative office at 09:30 am on Sunday.

University Vice-Chancellor Prof Dr Syed Samsuddin Ahmed and teachers and officers placed wreaths at the portrait of Bangabandhu in the BSFMSTU campus.

On January 10, 1972, Bangabandhu had returned to independent and sovereign Bangladesh after over nine and a half months of captivity in a Pakistan jail.

Bangabandhu was subjected to inhuman torture in the jail where he had been counting moments for the execution of his death sentence that was pronounced in a farcical trial.

Bangabandhu encouraged the Bangalee nation. He was the inspiration for the freedom fighters.

Later, a discussion on the significance of Bangabandhu was held at the university’s administrative building. BSFMSTU VC Prof Dr Syed Samsuddin Ahmed was the chief guest on the discussion.

Meanwhile, BSFMSTU VC distributed blankets among the local people on the occasion of Bangabandhu's Homecoming Day.