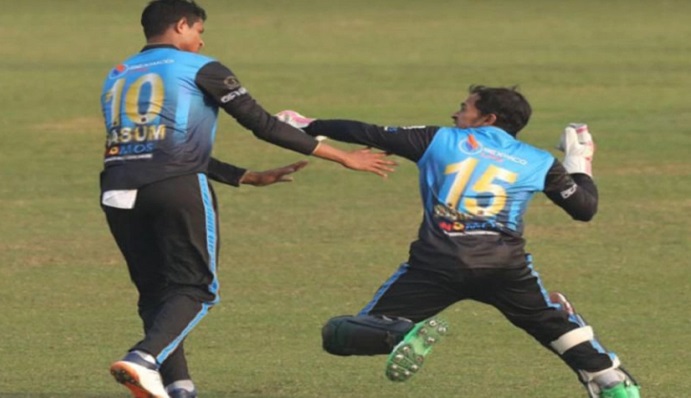 The game was important for Dhaka to keep the Bangabandhu T20 Cup final hope alive and they eventually won the game by nine runs to make them eligible to play the second Qualifier.

They will play the second Qualifier, a gateway to the final of the tournament, against a team who will lose the first Qualifier game.

During the important game, Dhaka fielders made several blunders, which were enough to make Mushfiqur Rahim angry. The blunders could have cost them the match but it eventually didn’t happen.

But that Mushfiqur lost his cool, surprised many, especially for his angry behavior to his colleagues on the field.

Twice he vented fire on left-arm spinner Nasum Ahmed, who had almost collided with Mushfiqur while taking a catch.

During the 13th over of the game, Afif Hossain hit a six off Nasum’s delivery, which left Mushfiqur fuming. In the next delivery, there was a run out chance as Nasum went for fielding in his own bowling while Mushfiqur ran from mid-wicket but they collided in the bowling end and eventually missed to inflict the run out on Afif.

Mushfiqur’s reaction to Nasum was surprising as he was almost on the face of Nasum, which was shown on the television screen.

Afif’s wicket was important for Dhaka as he kept Fortune Barishal’s hope to win the game alive. Afif was dismissed on 55 but his dismissal brought up another manic reaction from Mushfiqur Rahim.

The batsman tried to play a scoop shot, but top-edged and offered a catch at short fine leg. Mushfiqur ran hard and was successful in holding on to it. However as Nasum also tried to take the catch, he and Mushfiqur again collided.

This time also Mushfiqur’s reaction was surprising as he vented his anger by shouting at him. Nasum looked dejected and out of sorts during those two occasions when Mushfiqur came hard on him.

However later Mushfiqur was seen to talk to Nasum gleefully but his on field behavior was surprising to many.

“If he needs to vent his anger, he should do it in dressing after the match. But during the game, this sort of behavior could put an adverse impact on the players.”