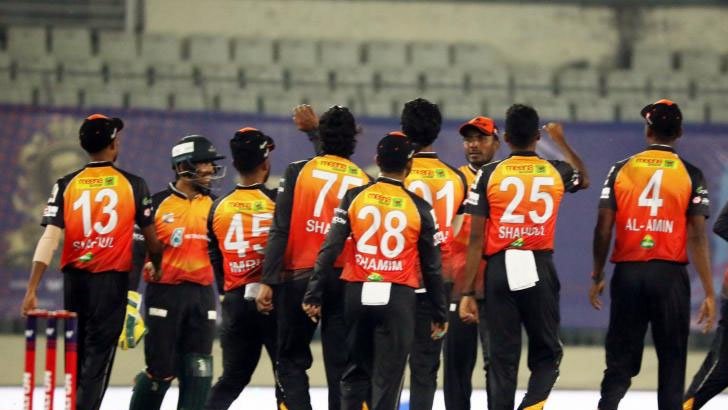 Opener Zakir Hasan, in his first match, hit a scintillating half-century in the Bangabandhu T20 Cup as Gemcon Khulna recorded a 48-run victory over Fortune Barishal in their fifth match at Sher-e-Bangla National Cricket Stadium on Friday.

Zakir’s 42 ball-63, studded with 10 fours powered Khulna to a respectable 173-6, a score that the bowlers defended well by dismissing a listless Barishal to 125 in 19.5 overs.

This was Khulna’s second victory against Barishal, following their four-wicket victory in the first-leg. The victory helped them to move up in the second spot of the point table with six points in five games.

Barishal remains at second bottom position after just one victory in five matches.

After being sent to bat first, Khulna made a horrible start with opener Jahurul Islam Omee departing for just 2.

But Barishal’s joy was short-lived as Khulna rode on Zakir and Kayes who bailed the side out of danger sharing a 90-run partnership for the second wicket stand.

Kayes was out on 37 off 34, hitting two fours and one six. Shortly after that Zakir was also dismissed as Khulna entered into the last powerplay.

Shakib Al Hasan continued his bad form with willow, making just 14 off 10. However, captain Mahmudullah Riyad gave the finishing touch despite the failure of the lower order as he made 24 off 14 with four boundaries.

Kamrul Islam Rabbi was the highest wicket-taker for Barishal with 3-33 while Taskin took 2-44.

Barishal got off to a good start in pursuit of big chase as captain Tamim Iqbal and Parvez Hossain Emon shared a 57-run for the opening stand.

Barishal then saw a sensational collapse as Emon with 19, Tamim with 32 and Afif with 3 were removed in quick succession, leaving the side in tittering 60-3.

Towhid Ridoy and Irfan Shukkur appeared to revive the innings but the dismissal of Shukkur for 16 invited another collapse, from which Barishal couldn’t recover and eventually tasted their fourth defeat in five matches.

Towhid Ridoy with 33 was the highest scorer for the side.