Jamal eyes a point in the least 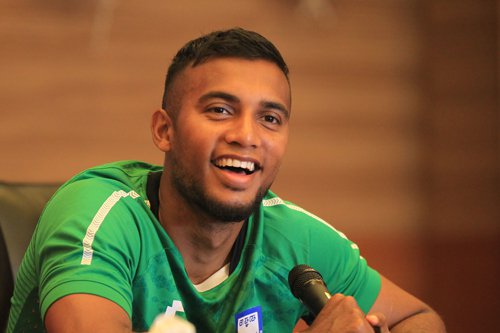 Bangladesh National Football Team Captain Jamal Bhuiyan said that their aim is to earn at least one point in their lone away match of the joint qualifiers round two of FIFA World Cup 2022 and AFC Asian Cup 2023 against Qatar at Abdullah bin Khalifa Stadium on Friday at 10:00pm (BST).

“The aim is to get at least one point. Qatar are strong and No 1 team in Asia. So one point would be very good for us. But of course, if we play well it will also be good. But people want results. Everyone will have to play together, defend together and attack together. We are a team, not only a defender, midfielder or forward. We will work together. Hopefully you will see a good Bangladesh team tomorrow,” the captain told reporters on Thursday.

Bangladesh returned to the field with two Nepal friendlies in November after a 10-month long COVID-19 break, ahead of a World Cup Qualifying game against the much stronger opponent. The team played two practice matches against two Qatari amateur teams and lost both.

On the other hand, their opponents and the Asian champions Qatar played three matches namely against Ghana in October, Costa Rica and South Korea in November. Besides, their booters have been taking part in their ongoing Qatari professional league, also known as QNB Stars League.

The Bangladeshi captain believes that his side are almost fit and well-prepared for the match.

“The team is now in very good shape. We have been practicing very hard in the last five weeks. We have played four matches. Out fitness is very good now and everyone is almost fully fit. Anyone can make a mistake but we have to reduce that and work on our mistakes. We have talked about those mistakes and we are prepared,” he concluded.