Booters pass ‘Yo Yo’ test 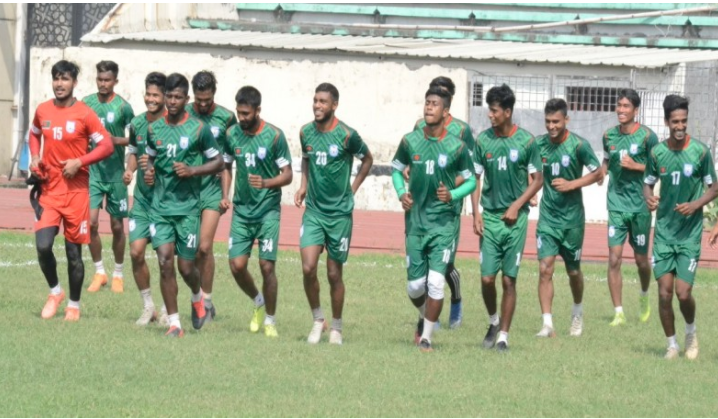 Bangladesh National Football Team, who went to Qatar to play their one-off lone away match of joint qualifiers round two for FIFA World Cup 2022 and AFC Asian Cup 2023 against hosts, underwent Yo Yo test on the second day of the training session at Al Aziziyah Boutique pitch on Monday morning.

Booters also did an hour-long gym session at the Aspire Football Academy gymnasium after the day’s field training. About the Yo Yo test, the newly appointed fitness coach of national team Ivan Razlog said, “The test was to see how fit the team was. I’m very happy looking at the players’ data that arrived at this moment. Now, I will speak with coaches if there is any improvement we need to make and. We conducted a gym session today. I think the players are doing well.”

After the day’s session, forward Sumon Reza said, “We did our second day training session today (Monday) ahead of the Qatar match. We worked on our fitness. We went through Yo Yo test, all of us did well there. Then, we played a mini-game. We are trying hard to play well against Qatar.”

The match is scheduled to be held at Abdullah bin Khalifa Stadium on December 4 at 10:00pm (BDT). Ahead of the match, booters will play two two practice matches against two amateur local teams -- Qatar Army Football Team and Lusail Sports Club -- on November 25 and 28 respectively, both at 5:30 pm (Qatar time) and at Aziziyah Boutique pitches in Doha.

Meanwhile, Bangladesh was scheduled to play against Qatar on October 13, but AFC, with the permission of FIFA, postponed the schedule until 2021 due to travel restrictions of different countries in the wake of COVID-19 last August. But they added that the participating nations can play their respective matches with mutual consent. Qatar took the opportunity and sent proposals to opponent nations. Among them, BFF agreed to the proposals.

In their first-leg match, Bangladesh conceded a 0-2 defeat against the Asian champions Qatar at Bangabandhu National Stadium (BNS) on October 11 last year. Despite conceding the defeat against Asian Champions, the men in red and green gave their best at BNS.