ASEAN countries can be potential pharmaceuticals market for Bangladesh: Speakers 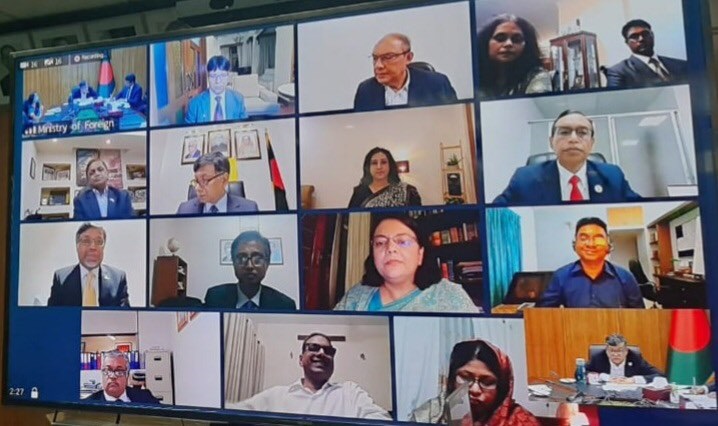 Speakers at a webinar organised by the Ministry of Foreign Affairs noted that Bangladesh has high potential to enter the ASEAN market.

If the technical and the non-tariff barriers are addressed, within the next four years Bangladesh’s export volume can reach up to $1.2 billion from the present $60 million.

To popularize the Bangladeshi drugs in the ASEAN markets, single country product fairs need to be organized frequently and Bangladeshi companies need to set up branches there.

Chaired by Foreign Secretary Masud Bin Momen, the webinar was attended by Bangladesh Ambassadors and High Commissioners posted to the South East Asian countries, different Chambers of Commerce having business interests with the ASEAN countries, representatives from various exporters’ associations and high officials of the Ministry of Foreign Affairs, Ministry of Commerce and Bangladesh Trade and Tariff Commission.

Prof Selim Raihan of Department of Economics, University of Dhaka presented the keynote paper on “Expanding Bangladesh’s Business Ties with the ASEAN Countries”.

In his opening remarks, the Foreign Secretary said that historically and traditionally, Bangladesh has had very close commercial and cultural links to the South East Asian countries due to her geographic as well as strategic complementarities.

Ambassador Masud Bin Momen said that in order for Bangladesh to attain the government set goal of $60 billion export figure by the turn of the year, the performance on the South East Asian front has to be much better.

In his keynote paper Dr. Selim Raihan pointed out that Bangladesh stands to gain significantly through integration with the South East Asian countries which will allow Bangladesh  to focus on export oriented manufacturing strategy and encourage export diversification.

Observing that presently Bangladesh’s exports to ASEAN countries are significantly low, he said, product diversification followed by market and need assessments in those countries will Bangladesh accelerate the desired integration process.

The five challenges he identified in export diversification are: a) pro-RMG bias in the policies and programmes, b) inadequate policies and strategies hurting non RMG sectors, c)weak collective action on non-RMG sectors, d) an environment with a high cost of doing business disproportionately affecting the non-RMG sectors; and e) low public spending on health and education leading to low productivity and skill development.

BGMEA President Dr. Rubana Huq said that by 2030 ASEAN as a bloc would be the 4th largest economy in the world and to enter that market Bangladesh should negotiate signing an FTA with a Rules of Origin clause favourable to the ASEAN.

MCCI President Ms. Nihad Kabir delivered the closing remarks. Supporting the idea of a pro-active trade policy, she stressed on the need to carry out an exercise on how our competing countries differ from us in terms of rule making and execution.

Additional Secretary (East) Ministry of Foreign Affairs Ambassador Mashfee Binte Shams suggested that the missions in the South East Asian countries may forge strategic partnership with prominent trade bodies and chambers in the host country to organize single country/single product fair not only in the capital city but also in the most vibrant commercial cities.

The meeting decided that from now on regular consultations would take place between the Ministry and the chambers on trade and vestment facilitation issues.