Joe Biden: How the president-elect plans to tackle climate change 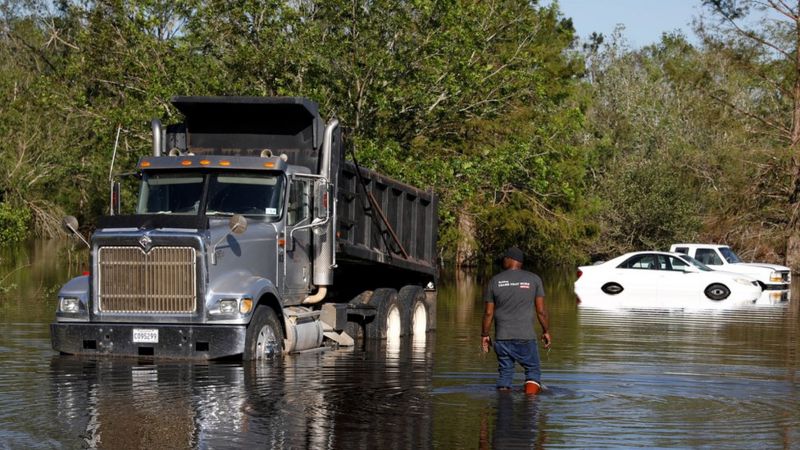 Joe Biden's plan to tackle climate change has been described as the most ambitious of any mainstream US presidential candidate yet. Our environment correspondent Matt McGrath considers what he wants to do, and how he might get it done.

Much will be made about Joe Biden's pledge to re-join the Paris climate agreement, the international pact designed to avoid dangerous warming of the Earth.

President Trump pulled out of the deal after the Obama administration had signed up in 2016, and during the drawn-out election count, Mr Biden confirmed that reversing the decision would be one of his first acts as president.

But key to his credibility on the international stage will be his domestic policies on cutting carbon emissions.

More radical Democrats such as congresswoman Alexandria Ocasio Cortez have put forward a proposal called the Green New Deal, which would eliminate carbon emissions from most sources over a decade. The Biden climate plan is more moderate.

However, if enacted, it would still be the most progressive climate strategy the US has ever attempted.

Mr Biden is proposing to make US energy production carbon-free by 2035 and to have the country achieve net zero emissions by the middle of the century.

Reaching net zero requires that any carbon emissions are balanced by absorbing an equivalent amount from the atmosphere by, for example, planting trees.

Once in office, Joe Biden wants to spend $2 trillion over four years to drive down emissions by upgrading four million buildings to make them more energy efficient.

He wants to spend heavily on public transport, to invest in electric vehicle manufacturing and charging points and give consumers financial incentives to trade up to cleaner cars.

All of these options have one additional component apart from cutting carbon: they put people back to work.

Andrew Light, a former senior climate official in the Obama administration, says Mr Biden is focused on what lowers emissions and increases jobs at the same time.

"You've got a really good menu to choose from in all of these different sectors."

Mr Biden has also said he will not allow fracking on federal land. Fracking is a drilling process in which chemicals are injected into rocks to liberate natural gas and oil, and is controversial because of its environmental impact.

However, since about 90% of it occurs on state or private land, the vast majority of fracking will be unaffected.

The Paris deal sought to keep global temperatures "well below" 2.0C (3.6F), but in 2018 UN scientists clarified how much of a difference it would make to limit the rise to 1.5C.

The 1.5C target could prevent small island states from sinking beneath the waves, it could ensure that millions of people avoid the disasters of extreme weather, it could limit the chances of an ice-free Arctic in the Summer.

Scientists say that Mr Biden's goal of reaching net zero emissions by mid-century could have significant implications for the 1.5C target.

"This could be an historic tipping point."

For the first time ever, this puts the Paris Agreement's 1.5C limit within striking distance, he says.

There will be a Democrat in the White House, but the Republican party currently controls the US Senate and has so far shown a marked reluctance to spend money on stimulating the economy, despite the pandemic.

That position might change if - as some have forecast - a January run-off election in Georgia gives Democrats control of the Senate.

But if not, there are still grounds for President-elect Biden to believe the upper house may be open to some of his climate plans.

While President Trump has taken a strident anti-climate approach, there has been a softening of rhetoric from some Republicans in the last couple of years.

There are already precedents of co-operation to point to. In September, Democrats and Republicans co-operated on a bill to cut the use of hydrofluorocarbons (HFCs), a family of gases commonly used as refrigerants. They include some of the most powerful greenhouse gases known to science.

Joe Biden also knows better than many how navigate the upper house; he was elected to the senate six times before serving as vice-president under Barack Obama.

If the president-elect can structure his plans so that they create jobs and new infrastructure, while also tackling carbon emissions, he may be able to find a way forward that works for both sides of the aisle.

"I think you could get a lot of common ground just around good policies that also have climate implications," says Katie Tubb, a senior policy analyst from the conservative think tank, the Heritage Foundation.

If he fails to agree legislation with the Senate, President-elect Biden will have to issue executive orders, similar to the way that Presidents Obama and Trump overcame such obstacles.

President Trump used them to roll back dozens of environmental regulations on the production of oil and gas, and on mileage standards for cars and trucks.

It's expected that many of those Trump rollbacks will themselves be rolled back at the start of the Biden administration.

But the weakness of the executive approach is that it is open to legal challenges. President Obama had to use executive orders to try and implement a key climate policy, the Clean Power Plan, but they were blocked by the Supreme Court.

If President-elect Biden goes down this route, the Supreme Court could present a potential stumbling block.

The court would ultimately rule on any litigation over his climate proposals, and with the court's strong conservative majority, that could be a significant problem for Joe Biden.

President Trump's decision to withdraw from the Paris accords took effect on 4 November - the day after the election.

A month after the Biden administration informs the United Nations of its decision to re-join, the US will once again be part of the global effort to curb climate change - much to the delight of climate diplomats.

"It would definitely be a positive move, not only because they are a big player, but I think because it really emphasises the fact that the US believes in the science of climate change," says Carlos Fuller, the lead negotiator for the Alliance of Small Island States (Aosis) in annual UN climate meetings.

These annual COP - conference of the parties - meetings are the mechanism by which countries agree to lower their carbon emissions. And US leadership is absolutely critical for this process.

With China, Japan and South Korea having set long-term goals to cut carbon, expectations are rising that the UN's COP26 climate summit, which convenes in Glasgow in November 2021, may turn out to be a success.

The UK government, which will run the Glasgow talks, will want every country to update their national carbon cutting plans with tougher targets than they submitted in in 2015. They will also want as many nations as possible to commit to net zero emissions by 2050.

The return of the US to the climate fold, under President-elect Biden, will bring both goals within reach.