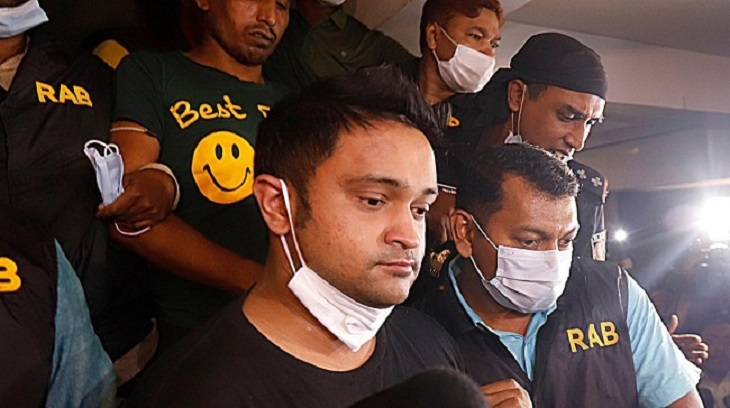 Four separate cases were filed against Erfan Salim, the suspended Councilor of Ward no 30 of Dhaka South City Corporation (DSCC), and his bodyguard Zahid under the Arms Act and Narcotics Control Act.

A mobile court of Rapid Action Battalion (Rab) on Monday sentenced Erfan and his bodyguard to one year in jail for possessing illegal walkie-talkies and drinking liquor.

RAB said Erfan and Zahid were given six-month jail each for drinking liquor and another six months for the illegal possession of walkie-talkies.

Two firearms, 38 walkie-talkies and liquor were seized from Irfan’s house during a RAB drive.

Erfan was arrested from his father’s residence on Devdas Lane in Old Dhaka on Monday afternoon for "attacking" Lieutenant Wasif Ahmed Khan of Bangladesh Navy.

Wasif filed a case over the assault at Dhanmondi Police Station naming four people and several unnamed accused. The three other accused are -- AB Siddique Dipu, 45, Md Zahid, 35, and Md Mizanur Rahman, 30. All four are now behind bars.

According to the case statement, a private car hit Wasif's motorcycle near Labaid Hospital at Dhanmondi around 7:45pm when he and his wife were returning to their Mohammadpur residence from Nilkhet.

Later, some people came out of the car and physically assaulted the navy official and his wife.

Meanwhile, the government has suspended Irfan from the post of councillor for assaulting the Navy official.

The Local Government Department on Tuesday issued a notification in this regard.