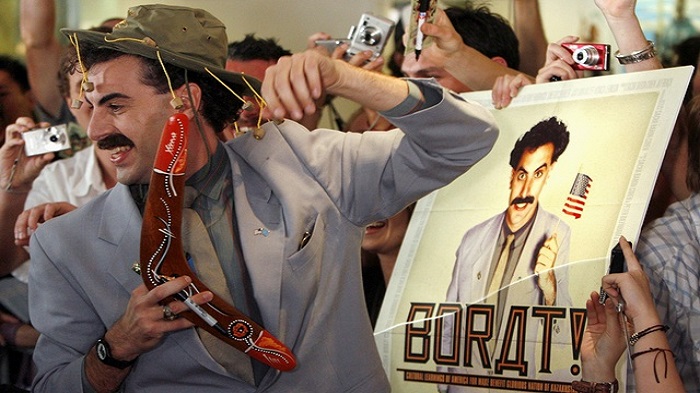 Fourteen years after comedian Sacha Baron Cohen brought his character Borat to America, the moustachioed journalist from Kazakhstan is back to wreak more havoc in “Borat Subsequent Moviefilm,” which began streaming Friday on Amazon Prime.

In the first film, Borat’s primary goal was to nab the “Baywatch” star Pamela Anderson as a wife, but his sights are set much higher here, as Kazakh authorities order him to infiltrate President Donald Trump’s inner circle.

Baron Cohen’s undercover prank war ensnares plenty of real-life politicians this time around, including Trump’s personal lawyer, Rudy Giuliani, who has spent the last couple of days attempting to debunk a salacious scene where he appears to make a move on Borat’s teenage daughter.

What exactly goes down in the sequel, and should the political scandals on view be taken seriously? Here’s a quick rundown of three of the most-talked-about moments in “Borat Subsequent Moviefilm.”

In his first attempt to curry favour with American authorities, Borat plans to give Vice President Mike Pence a famous monkey that has become an adult-film star in Kazakhstan. (Yes, that old plotline.)

Upon arriving in the United States, Borat pries open the crate containing the monkey and finds his teenage daughter Tutar instead; she has stowed away on his trip and eaten the monkey in transit. Left without his simian offering, Borat instead resolves to give Tutar to Pence as a child bride, and he travels to the Conservative Political Action Conference, held in February in Maryland, in the hopes of making the handoff to the vice president while he’s speaking at the event.

“How would I slip into this conference of Republicans unnoticed?” Borat wonders in voice-over. First, he dresses as a Klansman, nodding to conference-goers in the lobby from beneath his white hood. (“I’m Stephen Miller,” squawks Borat, referencing Trump’s senior adviser.) Having gotten past the lobby, Borat then takes refuge in a bathroom and assembles a second disguise, this time dressing up as Trump.

Flinging Tutar over his shoulder, Borat-as-Trump rushes into the ballroom to interrupt Pence’s speech, an incident that even made headlines at the time. “I brought the girl for you!” Borat yells at the peeved vice president before being ejected by security. But the most damning part of the sequence isn’t Borat’s prank; it’s the way the film lingers on Pence’s assertion that the government had the coronavirus outbreak under control, at a time when there were still only 15 reported US cases. What could Borat say that’s more shocking than real life?

A HOTEL ROOM AND GIULIANI

Having gotten nowhere with Pence, Borat resolves instead to give Tutar to Giuliani. But father and daughter hit a rough patch as Tutar undergoes a feminist awakening (as well as a Fox News blond-bombshell makeover), and she sets off to interview Giuliani on her own. Borat, who’s had a change of heart, rushes to the interview in the hopes of saving his daughter from what he presumes will be a carnal sacrifice.

In the meantime, Tutar and Giuliani sit down in a hotel room for the interview, which a nervous Tutar repeatedly fumbles. Giuliani attempts to reassure the girl, who responds with obsequious flattery and flirtation. The two even share some alcohol.

While Giuliani sits on the bed, Tutar unbuttons his shirt and appears to remove a microphone pack, but the moment is contextualized and scored to appear more like a seduction. Giuliani then leans back on the bed and puts a hand down his pants.

Giuliani has since claimed that he was merely tucking his shirt back in, and a plausible case could be made from the footage that he’s doing just that. Still, the camera lingers on Giuliani’s hand as it travels south of his waistband — an event that’s prolonged using multiple angles — until a lingerie-clad Borat interrupts the encounter and offers to take his daughter’s place, saying, “She 15, she too old for you.” (The actress playing Tutar, newcomer Maria Bakalova, is 24.) Confused, Giuliani leaves.

When the encounter went down in July, Giuliani told The New York Post that he called the police on Baron Cohen. In the film, Borat and Tutar escape and go for a giddy victory run through the streets of New York. They got what they wanted and, clearly, so did Baron Cohen.

As the film wraps up, Borat returns to Kazakhstan and stumbles upon a shocking comic revelation: His mission, as designed by Kazakh authorities, was actually a revenge plot to spring the coronavirus on the world.

Before he left, Borat was secretly injected with COVID-19, making him an unwitting patient zero for the pandemic. In a series of flashbacks, the horrified Borat remembers that his boat trip to America incorporated a pit stop at a wet bar in Wuhan, China, where he coughed all over the items on sale; he even docked briefly in Sydney and coughed on Tom Hanks, who turns up for a game cameo appearance.

In real life, Hanks was among the first high-profile Americans to contract the coronavirus, in March, while shooting an Elvis Presley biopic in Australia. Borat certainly makes for a funnier scapegoat, though Giuliani may find Baron Cohen’s super-spreading headlines less amusing.