BSF pledges not to use lethal weapons at border 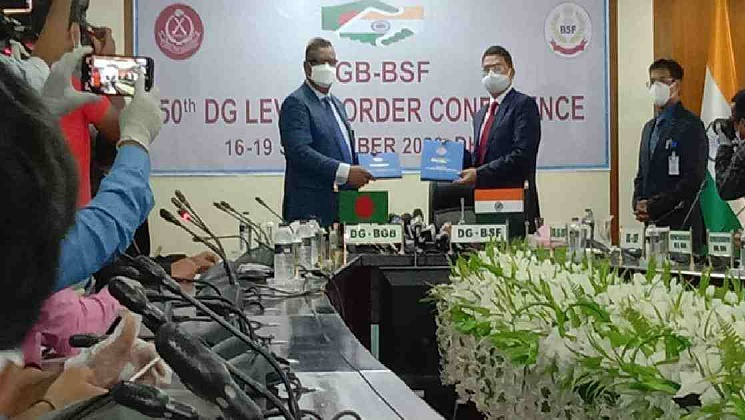 The BSF made the assurance in response to the concerns expressed by Border Guard Bangladesh (BGB) on border deaths.

The BSF assured that all unarmed and innocent trespassers and victims of human trafficking will be handed over to BGB personnel.

The BSF suggestion to launch joint operations against trans cross-border smugglers upon receipt of specific intelligence on their criminal activities was welcomed by BGB.

This was discussed at the Director General Level Talks of BGB and BSF held on September 16-19, said the Indian High Commission in Dhaka.

During the discussions, both the border forces, BSF and BGB,  made several proposals to reduce the cross-border crimes and strengthen their security cooperation.

BSF has launched a systematic campaign against the smuggling of codeine-based cough syrup in the bordering districts of India and will redouble efforts to reduce the cross-border drugs and narcotics smuggling.

The BGB appreciated the ongoing concerted efforts of BSF in substantially reducing the smuggling of narcotics.

Both the border forces recognised the increasingly violent attacks on them by cross-border cattle smuggling gangs and agreed to exchange intelligence on smuggling syndicates and list of smugglers to make efforts to significantly reduce the smuggling in order to ensure the India-Bangladesh border remain peaceful and secure.

Both the forces agreed that sharing of real-time intelligence is the key to reduce the cross-border crimes. BSF has proposed nominating officials in both the border forces as the nodal officials for exchanging such real time intelligence.

The Director General, BSF has proposed initiating joint patrols in cattle smuggling / smuggling prone  areas to reduce the menace of all kinds of smuggling.

The BGB has welcomed the initiative and both the forces agreed that identification of vulnerable areas   needs to be in responsive to the new methods being adopted by the trans-border smuggling syndicates.

Recognising the difficulties in identifying the nationality of mentally challenged persons, BSF has proposed creating a Standard Operating Procedure (SOP) to address such incidents on the border.

BGB has suggested issuing daily passes for the people residing in the bordering villages so that they can visit their relatives on the Indian side.

BSF has welcomed the suggestion and both the forces agreed to work out a mechanism in consultation with agencies/Ministries concerned to facilitate such social visits.

Reiterating the policy of zero tolerance against terrorism, BGB has requested specific intelligence and proposed conducting joint operations against insurgent groups, if any.

The onset of COVID pandemic has forced both the forces to stop coordinated patrols on the border.

Both the Director Generals agreed to resume these patrols on the border to build mutual confidence in both the forces and also to reduce the cross-border crimes.

Both the border forces decided to continue their confidence-building measures and training programmes after the ongoing pandemic subsides.

Responding to the request of BGB, BSF assured its cooperation in completing all riverbank protection works in the bordering areas of Bangladesh as per approval of SAMJoint River Commission.