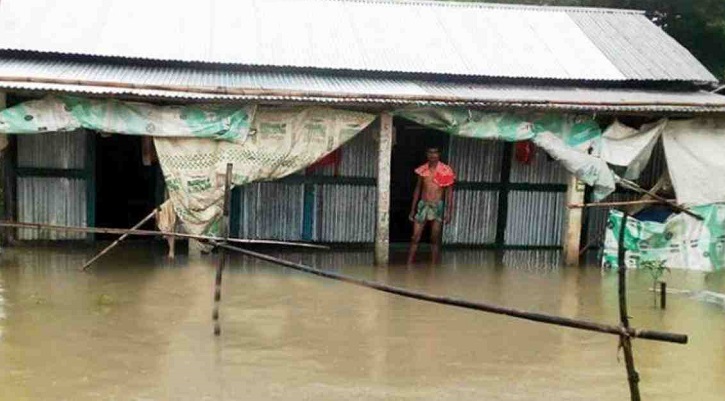 People are returning to their homes as the flood situation gradually improves in Kurigram with major rivers flowing through the districts all flowing below the danger level.

Brahmmaputra was flowing 11cm below its danger level at Chilmari point while Dharla was flowing 21cm under its danger mark at Bridge point area. Teesta was 55cm below the red mark at Kaunia point on Wednesday morning.

An estimated 350,000 people in 56 unions of the district have been affected by the flood. Many of those who took shelter on high grounds are starting to return to their homesteads as the flood water is receding.

Officials say they have distributed relief materials among the flood-affected people in remote char areas in Rajibpur and Chilmari upazilas on Tuesday.

The flood that began in the last week of June has affected 162 upazilas across and is yet to subside fully, said a bulletin of the Directorate General of Health Services.

People in Kurigram, Madaripur, Sirajganj, Tangail, Faridpur and Netrakona are the worst-hit from the deluge.

The government prepared 1567 shelters in the flood-affected districts.

The government has already formed 14 committees to accelerate the monitoring and cooperating activities including disbursement of fertiliser and seeds. The officials concerned of the ministry will have to work alongside the committee.