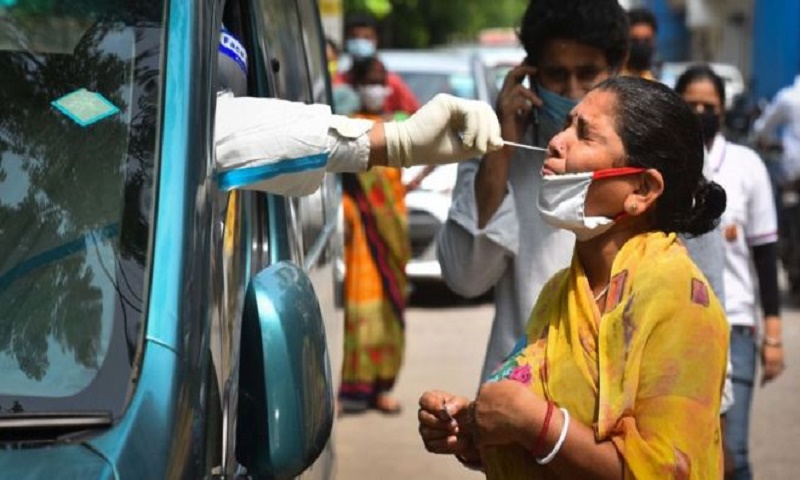 India's capital, Delhi, has seen a sharp dip in coronavirus case numbers in recent weeks. Is one of the country's biggest hotspots actually close to flattening the curve? Aparna Alluri finds out more.

Two weeks ago, Delhi was scrambling to fight a pandemic that appeared to be spiralling out of control.

June had been a terrible month for the city - with record surges almost every day, it accounted for most of the case load in the capital territory up to that point. Overrun labs and public hospitals added to the chaos and anxiety - as did conflicting information from the state and central governments.

By the end of the month, Delhi responded with a flurry of measures, from door-to-door health check-ups to increased testing, with the use of antigen tests, which are rapid but less reliable than the more widely-used RT-PCR tests.

While Maharashtra, the state with the highest case load, continues to see a rise, Tamil Nadu, also a major hotspot, is seeing a more gradual decline in daily case numbers.

As far as the situation in Delhi goes, Prof Reddy is cautious. "There are two explanations. One is that this is a genuine fall [in cases]. The other is that some of this is the result of the fact that they are using a lot of antigen tests."

That is, if antigen tests account for most of Delhi's increased testing rates, they may be missing a lot of cases, driving the case numbers down.

Antigen tests are fast - they give results in minutes, unlike the RT-PCR test, which is longer, more complex and takes hours to generate a result.

The crucial difference between the two is that they look for different parts of the virus as evidence of infection. The antigen test looks for viral proteins whose presence is taken as proof of infection. But their absence does not mean the person is not infected. The RT-PCR test, on the other hand, looks for the RNA of the virus, which is a far more reliable indicator.

In fact, India's current testing guidelines require that anyone who tests negative for the virus must be retested with an RT-PCR kit.

So the question is how many tests of each kind is Delhi doing, and is everyone being retested? That data is not publicly available, leaving experts wondering how much of Delhi's "turnaround" could be the result of a poor testing strategy.

"I am inclined to believe there is a drop in cases, an observation that is bolstered by the falling deaths," says Prof Reddy.

Delhi's reported Covid-19 daily deaths have fallen from 62 at the end of June to 41 earlier this week. It has now dipped below even Tamil Nadu, which has consistently reported fewer Covid-19 deaths than Delhi or Maharashtra since the pandemic began.

Experts see deaths as the second-best measure after confirmed cases, given the inconsistency of testing data.

Prof Reddy also points to the fact that the Delhi government has taken concrete steps that could explain a fall in cases to some degree, irrespective of the extent of testing with antigen kits.

"The public alarm helped, and there is a lot more energy in the system, and much better co-ordination between the centre and the state."

But at the same time, he says, it's too early to call this a turnaround. Only a continued drop in numbers - both cases and deaths - would count as evidence of a promising sign.

Instead, he adds, the focus should be on improving hospital admissions and access to speedy treatment to lower deaths. "That will also give confidence to people to self-report if they have symptoms."

But Delhi may not be the focus of attention for too long as cases are rising fast in other parts of the country.

Southern states such as Karnataka and Andhra Pradesh are seeing some of the steepest rises. Telangana too saw a rapid rise in cases until recently, but its testing has been inconsistent.

Tamil Nadu's dip in cases might be the result of a strict state-wide lockdown for two weeks but it also has one of the country's highest testing rates, and it's only using RT-PCR kits.

"During the lockdown, they had fever camps, suspected cases were referred to testing centres, transportation was provided," says Manoj Murhekar, director of the National Institute of Epidemiology in Chennai (Madras), the state's capital.

"But it's too early to say if this trend will continue," he adds.

Maharashtra continues to see a rise in daily case numbers - its capital city, Mumbai, has started to register a gradual decline, but surrounding districts, such as Thane, and Pune and other cities in the state are seeing spikes.

"After the lockdown, the movement of people was much more than what the government anticipated," says Subhash R Salunke, an adviser to the state government on its Covid-19 response.

"But my worry is the deaths."

With more than 10,900 deaths, Maharashtra has more Covid-19 fatalities than any state in India - and deaths have been rising too.

"You will see a downward trend in Mumbai definitely," Dr Salunke says. "But this is not going to be over soon."