Bashundhara Group, a true friend of its employees 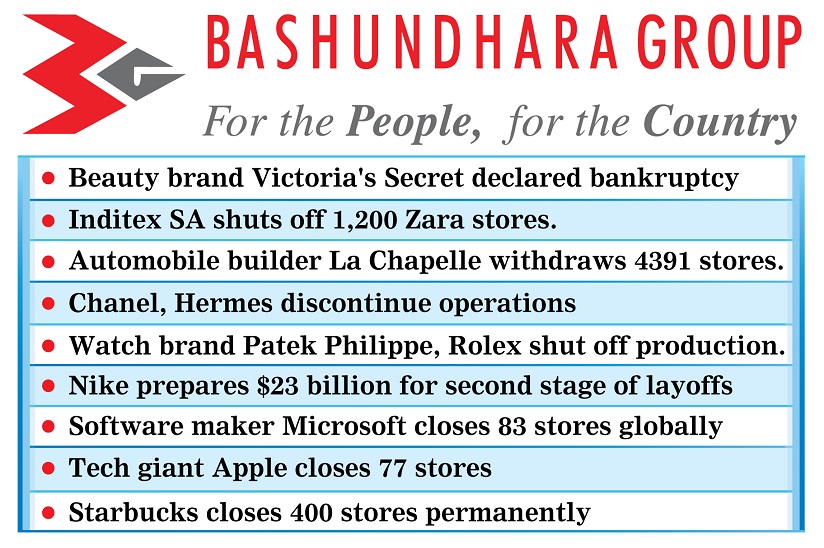 Bashundhara Group is moving forward with its business operations standing by its employees despite the global economic slowdown triggered by the coronavirus pandemic and has started the new fiscal year with a fresh vow to make great strides.

The country’s leading business conglomerate has been maintaining transparency in continuing transactions with the financial institutions amid the ongoing corona crisis.

Though many businesses in the country and elsewhere in the world have fallen into bankruptcy due to the corona pandemic, Bashundhara Group has remained steadfast in moving ahead remaining with its employees.

Some 1.6 billion workers, almost half of the global labour force, are now at the risk of losing their livelihoods, according to the International Labour Organisation (ILO).

Bangladesh Institute of Development Studies (BIDS) estimates that about 16.4 million people have already become ‘new poor’ in the country due to the corona pandemic.

Even in the current corona situation, Bashundhara Group is providing various kinds of benefits for its employees on human grounds, which has been widely appreciated by economic analysts.

This has become possible because of Bashundhara Group Chairman Ahmed Akbar Sobhan who has already earned reputation globally for showing business excellence as we as his philanthropic contributions.

Experts say that many business giants have been hit hard by the corona pandemic as tens of thousands of companies went bankrupt within five months of the emergence of the deadly bug.

“I’m happy to learn that it (Bashundhara Group) has been able to start the new fiscal year with no job cuts and no closure of any of its entities in the last fiscal, which has indeed set an example for the entire global economy,” Dr Atiur said

World economy was already under huge pressure of recession since 2019 while corona pandemic has accelerated downslide in growth and Bangladesh has not been spared either by this health disaster, he noted.

The government had to come forward with hefty stimulus packages to keep many of the manufacturing units afloat. Even many business houses went for shedding their employees or pay cuts or even closures of some of their units.

“Bashundhara Group has been an exception and holding their fortes with courage and empathy to its employees. This is indeed a very difficult moment for all of us. We need to survive together. I’m sure there will be a speedy recovery of our economy if we can suppress the coronavirus and open up the economy maintaining health guidelines. Till then, let’s remain less ambitious of making more growth and more profit at the cost of employees,” Dr Atiur, also Bangabandhu Chair at Dhaka University, said.

He hopes that Bashundhara Group turns out to be a role model of sustainability-linked inclusive entrepreneurial pathfinder by ensuring safety of employees as the hardworking people are making significant contributions to the development of the business conglomerate.

On the other side of mirror, retailers across the globe have fallen into pressure due to rising costs and changing shopping habits due to the stay-at-home across the world over corona scare.

Tech giants Microsoft and Apple joined the race for closing physical stores to reduce cost of operations. Microsoft has announced that it will close its all 83 official stores across the world.

The decision seems to be made after Microsoft decided to temporarily close stores in March due to the spread of the corona virus. Besides. Apple closed 77 stores in different parts of the world.

Zara-owner Inditex SA said it is permanently closing as many as 1,200 stores—16 percent of its global outlets—and will pivot more aggressively toward selling online, as the fast-fashion giant maps out its post-pandemic future.

Besides, couples of beauty brands in France — Chanel and Hermes — has announced discontinuation of business operations while clock manufacturers Patek Philippe and Rolex shut down production

American multinational footwear and apparel firm Nike has prepared $23 billion for the second stage of the company’s layoff.

The tourism sector is the worst affected by the corona pandemic as the global room booking company Air BnB founder Brian Chesky claimed that the corona destroyed 12 years of efforts in six weeks.

"Strength of Bashundhara’s financial and strategic management and above all human approach is commendable,” Sheikh Fahim, also Managing Director of Obsidian Bangladesh, told the daily sun.