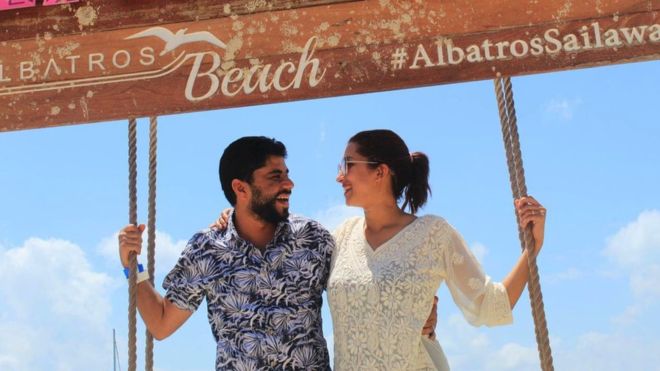 It began with a wedding in Egypt's capital Cairo on 6 March: eight years after they first met, 36-year-old Khaled and Peri, 35, married in front of their friends and families.

A few days later, the Dubai-based couple left for Cancún, Mexico, with barely a worry in the world: coronavirus seemed a distant concern, as it had yet to fully spread across the globe.

So while the couple were careful to avoid crowded places, they say they "never expected" travel restrictions to affect their plans.

But by the time they were returning home to the United Arab Emirates (UAE) via Turkey on 19 March, the full scale was becoming apparent.

"While we were on the plane we had access to internet and then we started getting messages from people 'Are you going to be able to get to Dubai? There's a new law, they're banning expats,'" Peri told the BBC.

Still, as they were already in the air, they assumed they would be allowed to travel. But when they tried to board their connecting flight in Istanbul, they were told they could not board.

The new rules had come into place just as they set off from Mexico.

The couple were left stranded at the airport for two days. Restrictions in Turkey meant they were not allowed to leave and enter the city.

Whilst, without a valid boarding pass they struggled to buy toiletries and clothes, and were not even allowed to collect their luggage.

"We decided to go on Google and check all the countries that allowed Egyptians without a visa, and then check if they had flights," Peri said. It appeared they only had one option: the Maldives.

A set of islands with clear white sand and turquoise water in the Indian Ocean, the Maldives is renowned as one of the most beautiful places in the world. Khaled and Peri had even considered heading there for their honeymoon instead of Mexico.

However, on this occasion it was not the prospect of the beaches and snorkelling opportunities that excited the couple the most.

"I remember that moment we were let through immigration," Peri recalled. "We looked at each other and we were very happy that at least we would be sleeping in a bed as opposed to airport seats!"

Khaled, a telecoms engineer, said, laughing: "We were so happy to see our luggage."

But once the immediate stress of finding a place to stay had been resolved, new challenges dawned on them.

"We started realising there is a major financial burden, our jobs - we wouldn't be able to perform them well. We didn't pack our laptops," said Peri, who works in media. "When you're on honeymoon you don't expect to be working much."