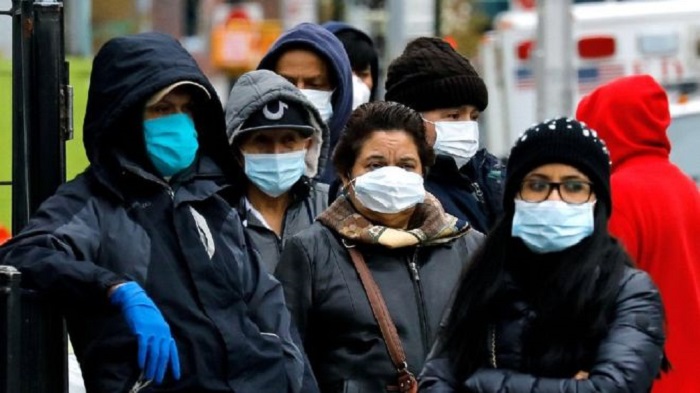 Ventilators will be taken from certain New York hospitals and redistributed to the worst-hit parts of the state under an order to be signed by Governor Andrew Cuomo.

New York saw its highest single-day increase in deaths, up by 562 to 2,935 - nearly half of all virus-related US deaths recorded yesterday.

The White House may advise those in virus hotspots to wear face coverings in public to help stem the spread.

A shortage of several hundred ventilators in New York City, the epicentre of the outbreak in the US, prompted Cuomo to say that he will order the machines be taken from various parts of the state and give them to harder-hit areas.

Amid a deepening crisis, top health official Dr Anthony Fauci has said he believes all states should issue stay-at-home orders.

"You've got to put your foot on the accelerator to bring that number down," he added, referring to infection and death rates.

The comments from Dr Fauci, who heads the National Institute of Allergy and Infectious Diseases, appeared to contradict those of President Trump, who has consistently dismissed the notion of a nationwide lockdown.

"It's awfully tough to say, 'close it down.' We have to have a little bit of flexibility," Trump said on Wednesday.

New York state remains the epicentre of the US coronavirus outbreak with at least 102,863 positive cases.

The more than 500 person spike in deaths state-wide over the past day is more than half of that reported in a single day in both Spain and Italy, the countries with the greatest fatalities.

New York City is the worst-hit area of the state, with 1,562 deaths, Johns Hopkins University reports.

Cuomo warned on Friday that people would die unnecessarily because of a lack of equipment in the areas most devastated by the outbreak.

The governor said he would deploy the National Guard to enforce a new executive order giving the state authority to take and redistribute ventilators from hospitals and other healthcare institutions to facilities in parts of the state most urgently in need.

These institutions will either receive their supplies back or be reimbursed, he said.

"I'm not going to let people die," Cuomo said of the order.

Cuomo said this week that New York will need nearly 37,000 ventilators for the "apex" of the state's outbreak, expected to hit at the end of April. Bill de Blasio, the New York City mayor, said the metropolis needs 400 additional ventilators by Sunday.

What's the debate over masks?

Both the US Centers for Disease Control (CDC) and the World Health Organization (WHO) are reassessing their guidance on face masks, as experts race to find ways to fight the highly contagious virus.

Covid-19 is carried in airborne droplets from people coughing or sneezing, but there is some dispute over how far people should distance themselves from each other, and whether masks are useful when used by the public.

The WHO advises that ordinary face masks are only effective if combined with careful hand-washing and social-distancing, and so far it does not recommend them generally for healthy people.

However, more and more health experts now say there are benefits. They argue that the public use of masks can primarily help by preventing asymptomatic patients - people who have been infected with Covid-19 but are not aware, and not displaying any symptoms - from unknowingly spreading the virus to others.

Masks may also help lower the risk of individuals catching the virus through the droplets from another person's sneeze or a cough - and people can be taught how put masks on and take them off correctly, they argue.

On Thursday New York mayor Bill de Blasio urged all New Yorkers to cover their faces when outside and near others, but not to use surgical masks, which are in short supply.

Governor Cuomo weighed in on Friday, saying "I think it's fair to say that the masks couldn't hurt unless they gave you a false sense of security."

Meanwhile, residents in Laredo, Texas will now face a $1,000 (£816) fine if they fail to cover their noses and mouths while outside, after city officials issued an emergency ordinance to its approximately 250,000 residents this week.

Dr Deborah Birx, one of President Trump's coronavirus advisers, expressed caution about general mask-wearing. "We don't want people to get an artificial sense of protection," she said. "They're an additive."

There is also disagreement among experts over the benefits of using cloth masks. European advisers say reusable cloth masks are not recommended and may even increase the chance of infection.

Which states are not in lockdown?

At least 297 million Americans in 38 states, the District of Columbia and Puerto Rico have been told to stay home. But the governors of 10 states have so far stopped short of asking all residents to remain indoors.

North Dakota, South Dakota, Arkansas, Iowa and Nebraska so far have no state-wide order urging people inside. "A targeted approach is what is working for us in Arkansas," said Governor Asa Hutchinson this week. "People are misled by this idea that this stay at home order is magical."

Iowa Governor Kim Reynolds has argued: "I can't lock the state down... I can't lock everybody in their home."

Other states have left the decision to local officials while still refraining from any state-wide action. Residents in parts of Alabama, Missouri, Oklahoma, South Carolina, Texas, Utah and Wyoming face some degree of stay home orders, issued by local authorities.

"Our state is so diverse, every segment of the state is different," said Missouri Governor Mike Parsons this week, defending his reticence to take such action. "It's very difficult sometimes to just put a blanket order in place."

"Y'all, we are not California," said Alabama Governor Kay Ivey to reporters. " We're not New York, we aren't even Louisiana."

How serious is the pandemic in the US?

Hospitals and morgues in New York are struggling to cope with the pandemic, and New York Governor Andrew Cuomo has warned that New York risks running out of ventilators for patients in six days.

An emergency field hospital now stands in Central Park, and another makeshift hospital is to be set up in the city's Javits Center, a conference venue.

The White House has ordered car firms to switch rapidly to ventilator production.

More than a million cases of coronavirus have been registered globally, according to Johns Hopkins University.