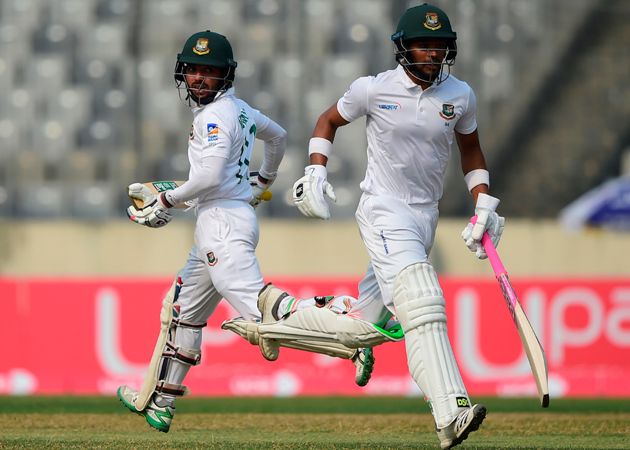 Nazmul Hossain Shanto and skipper Mominul Haque struck half-centuries as Bangladesh is firmly on course of taking a sizable lead over Zimbabwe in the one-off Test at Sher-e-Bangla National on Sunday.

At the end of the day two, Bangladesh reached 240-3, capping off another dominating day over the visitors.

The host are still trailing by 25 runs but with Mominul and Mushfiqur Rahim in the crease, a big lead looks imminent. Shrugging off his recent bad patch with willow, Mominul remained firm for his ninth century, batting on 79 with Mushfiqur Rahim on 32.

Nazmul Hossain Shanto earlier struck his maiden half-century and eventually hit a well-composed 71 runs knock. Bangladesh took Zimbabwe’s last four wickets for 37 runs to dismiss the visitors for 265 in the morning session of day two but made a shaky start to their first innings, having lost opener Saif Hasan for 8.

Promising Saif indicated a good day for him, hitting a picture-perfect straight drive for boundary at the outset of his innings but was undone by a victor Nyachu-delivery.

Shanto and Tamim Iqbal steadied the ship, playing with utmost confidence against a disciplined Zimbabwe bowling. Coming off a horrible match against Pakistan, Tamim looked set for a big score as he played some convincing shots around the part to make the visitors disarray.

Shanto seemed to be determined to carry his Bangladesh Cricket League (BCL) form in which he struck his maiden double century.

As the things were going right direction for Bangladesh, Donald Tiripano had Tamim caught by wicket-keeper Regis Chakabva for 41, bring an end to the 98-run second wicket partnership.

Tamim smashed seven boundaries in the knock in which he played 89 deliveries and in the process also completed his 13000 runs in International cricket across the format.

Shanto remained unfazed and completed his first half-century, punching a fuller delivery of Sikandar Raza through mid-off for a single.

Debutant Charlton Tshuma found extra bounce to get the better of Shanto for his maiden wicket after the batsman struck 139 ball-71, clobbering seven fours.

Mominul played 120 balls so far for his 79, his 14th half-century that came with the help of nine boundaries. Mushfiqur sent the ball across the rope for six times for his 32 off 68.

Tiripano, Nyachu and Tshuma ended with one wicket apiece on day two.

Rahi finished with 4-71, his career best bowling in an innings so far while Nayeem conceded 70 for his four-for. Leading spinner Taijul Islam who was off colour on day one, ended with 2-90. Resuming the day two on 228-6, Zimbabwe was able to add just 37 runs to their overnight total with Rahi and Taijul taking the rest of the four wickets.

While the lower order batsmen found it tough to deal with Rahi and Taijul in the morning session of the day two, Regis Chakabva was the only one who could offer genuine resistance.

Chakabva made 30 with the help of three boundaries before being dismissed by Taijul Islam as the last batsman. Stand-in captain Craig Ervine was the highest scorer for Zimbabwe with 107 while opener Prince Masvaure made 64.