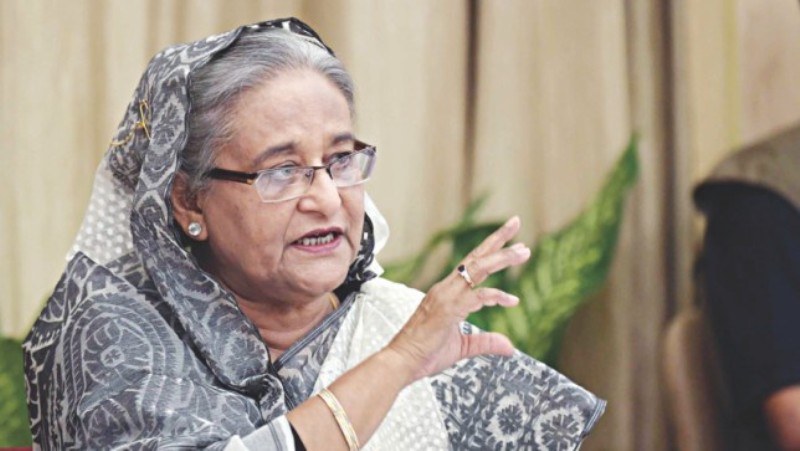 Prime Minister Sheikh Hasina on Saturday reiterated her determination to make Bangladesh a technology and knowledge-based dignified nation along with ensuring economic emancipation of the countrymen.

“Side by side with ensuring economic freedom of the people, we want to build the Bangalee nation as a modern technology and knowledge- based country in the international arena and through it, we also want to materialize Bangbandhu’s dream of establishing a hunger and poverty-free Sonar Bangla,” she said.

Sheikh Hasina, also the president of Bangladesh Awami League, was addressing a discussion at Bangabandhu International Conference Center (BICC) in the city this afternoon.

The prime minister said the government is advancing the country not only economically, but also has given importance to the technology-based education.

“We’ve ensured scopes for the people to use various types of modern technologies like internet service and mobile phones,” she said.

“Once Bangladesh was known as a country of famine and natural disasters like cyclone and tidal surge. But by the grace of the Almighty, none can now call Bangladesh in these words,” she said.

The prime minister said the language martyrs protected the dignity of the mother language by sacrificing their lives. “Following their footprint, we earned independence in exchange for blood of three million martyrs,” she said.

Sheikh Hasina said: “Their sacrifice cannot go in vain and we’ll not allow it to go in vain and it’s our commitment … we will build Sonar Bangla as dreamt by Bangabandhu and celebrate Mujib Borsho successfully with this pledge.”

Eminent poet Tarik Sujat recited a poem in memory of the martyrs of the language movement.

At the outset of the discussion, a minute’s silence was observed in memory of the martyrs of the Language Movement and the Liberation War and Father of the Nation Bangabandhu Sheikh Mujibur Rahman and martyrs of the August 15 carnage.