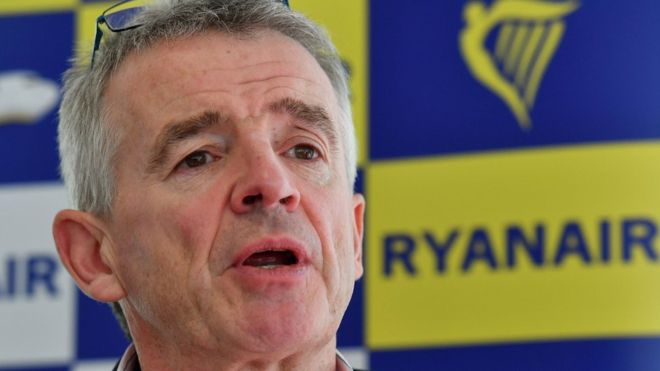 Ryanair boss Michael O'Leary has been criticised for saying Muslim men should be profiled at airports because "that is where the threat is coming from".
He made his comments in the Times.
The chief executive also said families with young children should be waved through airport security because there was virtually zero chance of them being responsible for attacks.

The Muslim Council of Britain said Mr O'Leary's comments were "racist and discriminatory".
"This is the very definition of Islamophobia," its spokesperson added.
In the wide-ranging interview, Mr O'Leary, 58, said: "Who are the bombers? They are going to be single males travelling on their own. If you are travelling with a family of kids, on you go; the chances you are going to blow them all up is zero.

"You can't say stuff, because it's racism, but it will generally be males of a Muslim persuasion. Thirty years ago it was the Irish. If that is where the threat is coming from, deal with the threat."
The MCB said Muslims face institutional discrimination in many aspects of life.
"Institutional discrimination against Muslims is well established: whether it is the ability to get a job, buy a flat or even getting car insurance. The challenges of #flyingwhilstMuslim are well documented across the globe," a spokesperson said.
"It is a shame that such racism is being expressed so openly, and that the CEO of a large airline would so want to discriminate against his customers so brazenly."
Civil liberty groups have argued profiling, including on the basis of race, religion or gender, violates people's rights.
One profiling expert previously told the BBC that the benefit of such profiling only outweighs the cost in exceptional circumstances.
Airlines in the UK have previously said airport security checks should be reduced to improve the experience for passengers.
People arriving and leaving the UK are already profiled by border agencies and police through advanced passenger information, including payment details and passport numbers.

O'Leary, who has worked for Ryanair for 30 years, also used the interview to lament planning rules requiring the company to provide facilities for disabled staff and referred to obese passengers as "monsters" who "may need to buy two seats".
The BBC has approached Ryanair for a response to the criticism of Mr O'Leary's comments.