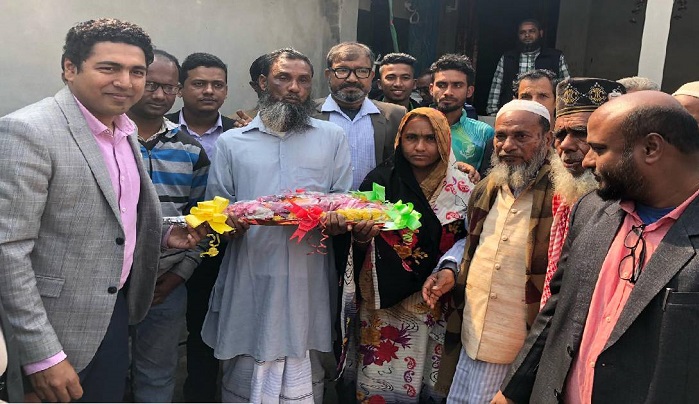 Though the newfound cricket star is still in South Africa, the home of Shoriful Islam, a member of the Bangladesh U-19 Cricket Team, at Nogordanga village in Debiganj upazila is abuzz with waves of celebrations.

People in their hundreds are visiting his home to share their feelings on the Junior Tigers’ stunning victory clinching the U-19 World Cup trophy.

Bangladesh became the champions beating India by three wickets in the nail-biting final at Potchefstroom, South Africa on Sunday.

As an important member of the winning team, Shoriful’s contribution has not gone unnoticed by the people in his locality and they are thronging his home since Monday morning to express their felicitation.

Leaders of different political parties, officials of the local administration, cultural activists, prominent personalities of the locality and cricket lovers are meeting Shoriful’s family members with flowers, sweets and their best wishes for the cricketer.

In the final, Shoriful bagged two wickets in 10 overs giving away 31 runs. He also took two important catches and inflicted a run-out. This left-arm fast bowler captured the imagination of his village with his consistent performance throughout the tournament.

The local administration arranged a big screen at the Bijoy Chattar for viewers to watch U-19 World Cup matches and has decided to accord a grand reception to Shoriful on February 18 after he returns home.

“We’re highly impressed with the Shoriful’s bowling style, his immaculate line and length. He’s the pride of Debiganj. He’s a future prospect for the national team as a pace bowler,” said Prattay Hasan, Upazila Nirbahi Officer (UNO) of Debiganj, on Monday.

“We hope he’ll play an important role in the national team with his bowling. We’re working to produce more bowlers like him here and we’re by Shoriful’s family for all kinds of administrative assistance,” he added.

Shoriful’s father Dulal Mia is a small farmer while his mother Bulbuli Begum is a housewife. Shoriful is the second among four siblings. He passed his SSC examination from Kaliganj Sukatu High School. Afterwards, he got admitted to Kaliganj College.

According to Shoriful’s father, poverty forced his family to move to Jirani Bazar in Savar where he used to work as a rickshaw-puller. Shoriful passed Class-V from Gohalbari Govt Primary School in Jirani. In 2010, they moved back to Panchagarh.

“Shoriful started playing cricket in his childhood and often bunked school to play in the field. He is really passionate about cricket. I’m really happy that he’s playing for the country,” Dulal Mia said.

According to his younger sister Dulali Akhter, Shoriful is crazy about cricket and used to spend more time playing than study. “He used to stay outdoors all the day,” she said.

“He got admitted to Clemon Cricket Academy in Dinajpur. From there, he went to Rajshahi where he participated in a cricket league for the first time. Then he went to Dhaka and made his debut in the Premier Division as a player of Prime Bank,” she said.

Shoriful’s mother said whatever his son earned by playing cricket, he used to spend it all on his family. “With the money earned from BPL, Shoriful bought a house and built a farm. Now this farm is our source of livelihood.”