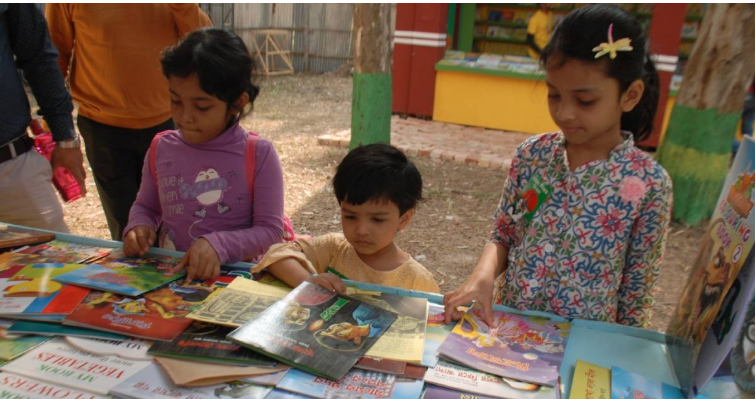 The Amar Ekushey Book Fair-2020 saw a big turnout of visitors on Friday, the first weekend of the month and the sixth day of the fair.

Thousands of people of all ages, particularly the youth and children, flocked different stalls and pavilions to find out books by their favourite writers.

On the first day of Shishu Prohor (children's hour) at Amar Ekushey Book Fair, the fairground was abuzz with children when the fair has dedicated hours - 11am to 1pm - for children.

Children enjoyed various games, bought books and took pictures with characters of Sisimpur at Shishu Chhattar, a platform dedicated to children in the fair for learning and playing at the same time.

Tanha Rahman Priyonti, a fourth grader from Purana Paltan, came with her parents to participate in the Children’s Hour.

“I’ve bought two story books and played with Tuktuki (costumed characters from the popular children’s series Sisimpur). I visit the fair with my parents every year and love to buy story and drawing books,” she said.

Guardians also lauded the Bangla Academy initiative to bring popular children’s series Sisimpur characters in the fair and said it will attract children.

Masum Talukder, a resident of Mirpur in the capital, said it has been a source of pleasure and amusement for her children.

“Sisimpur is the only series popular among the children. I think this arrangement to bring the children’s favourite characters is giving them joy as well as enriching their knowledge,” she said.

Imran Hossain, a staff of Sisimpur stall said, “Children are happy to see their favourite characters. Not only children but also the youth are coming here to buy new books.”