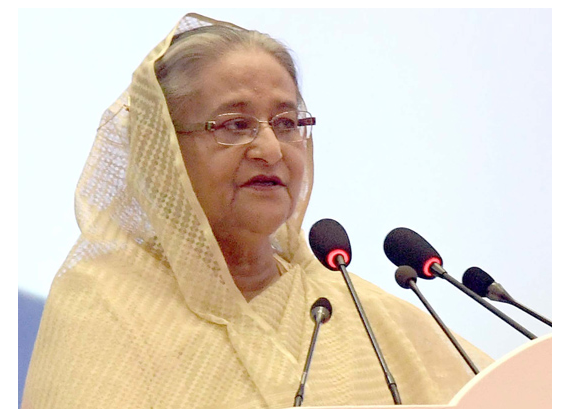 Prime Minister Sheikh Hasina sought more support from the development partners to keep up the country’s development spree and make it (development) sustainable, urging them not to impose so many conditions in this regard.

“We’ve taken many steps for further uplift of the country and we hope that our development partners will continue to extend their assistance by not giving many conditions so that we could complete all our programmes smoothly,” she told the inaugural session of the Bangladesh Development Forum (BDF) at Bangabandhu International Conference Centre here this morning.

Reiterating her determination to advance the country further, Sheikh Hasina said her government wants to make sustainable the development works that it (government) launched.

“To make the (uplift) works durable, economic solvency is a must, and in this case, I think that our development partners will come forward and extend support (to us),” she said.

The premier went on saying: “Besides they (development partners) don’t have any hesitation in extending cooperation to any country if it’s
successful and they show more interest to help that country….I hope, it’ll happen.”

The Economic Relations Division (ERD) under the Ministry of Finance has organised the two-day flagship event to highlight the formulation of the ensuing eighth Five Year Plan and the ways forward of attaining the Sustainable Development Goals (SDGs) before the development partners.

The slogan of the forum is “Effective Partnership for Sustainable Development”.

Finance Minister AHM Mustafa Kamal presided over the inaugural session of the forum.

“So we’ve formed trust fund by our own finance to check the adverse impacts of climate change,” she said.

The prime minister pointed out that Bangladesh gets a little assistance in combating the adverse impact of climate change. “But in this case, I think the developed countries and development partners will have to come forward further and extend more assistance in this regard,” she said.

In this connection, Sheikh Hasina said not only Bangladesh, but the assistance is also needed for small islands and other countries which could be affected due to the climate change.

Sheikh Hasina said the countries like Bangladesh are not responsible for climate change in any way. “But we’re going to be the worst sufferers of the climate change,” she said.

“That’s why those, who are responsible for it, should make the highest contributions to fight climate change,” she opined.

Elaborating her government’s various steps to combat climate change, the prime minister said the government has constructed multipurpose cyclone shelters and imparted training to the volunteers.

“We’ve formulated Delta Plan-2100 and started its implementation to protect the country from the adverse effects of the climate change,” she said.

Sheikh Hasina said Father of the Nation Bangabandhu Sheikh Mujibur Rahman liberated the country to change the lot of the exploited and deprived people.

She said the Father of the Nation could not fulfill his dreams as he was assassinated brutally within three and half years of independence.

“After his assassination, the country’s democracy not continued and military dictators ruled the country and as a result the desired development of the country was not made,” she said.

The prime minister said coming to power after long 21 years, Awami League government started journey with an aim to develop the country truly and fulfill the ideology with whom Bangabandhu had liberated the country.

“It will have to keep in mind that no country could be developed without a political commitment and it’s now proven truth in the case of Bangladesh,” she said.

Sheikh Hasina said after the independence the Father of the Nation established and strengthened relations with different countries and development partners.

“After assuming office, we’re running the state following his footprint and as a result the country is moving ahead,” she said.

The prime mentioned that Bangabandhu used to see Bangladesh’s interest in the biggest way and how Bangladesh could be developed and freed from poverty.

“To achieve the goal, he framed a long-term plan and constituted the planning commission and undertook the five-year plan,” she said.

Sheikh Hasina said after assuming office in 1996 her government started the advancement of the country by enacting the fifth five-year plan.

The premier said the United Nations at that time set the millennium development goals (MDGs) and “Our government had taken many initiatives and our development partners extended support to this end.”

Sheikh Hasina said Awami League again formed government after its landslide victory in the 2008 general elections and “Since then, we have been running the state.”

The premier mentioned that there should be a good planning alongside the political decision and commitment to build a country.

“The development of any country could be accelerated if any political party has a good planning,” she said.

“We want this development will not be only for urban people and but also for the rural people … we don’t want that rural people remain deprived and we want every person gets a touch of development and their life is meaningful,” she said.

The prime minister also spelled out her government’s success in alleviating poverty and controlling inflation.

Sheikh Hasina said Bangladesh has graduated to a developing country from a least developed one. “We want not a single person to remain homeless and every person will get a beautiful life,” she said.