Preparation of Ekushey Book Fair goes on in full swing 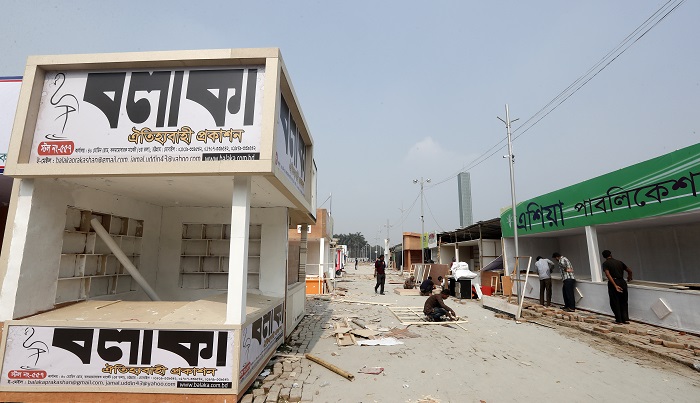 Preparation for Amar Ekushey Book Fair 2020 is going on in full swing on the Bangla Academy premises.

The month-long book fair will begin on February 2.

While visiting the venue on Sunday, this correspondent found workers busy designing and making stalls.

The publishing companies have already completed setting up their pavilions and stalls.

Yunus Ali, a contractor of a stall said, “We’re working fast as the publishers told me to finish the work as early as possible.”

The Bangla Academy Literature Award will also be distributed at the opening ceremony.

Bangla Academy director and member secretary of the fair organising committee Dr Jalal Ahmed told daily sun that they have taken all the preparations to make the fair successful.

“We’ve almost completed all the formalities. A total of 900 units have been allocated to 550 publishers,” he said.

This year, Bangla academy is going to publish 200 books.

Of those, 100 will be on life and works of Bangabandhu Sheikh Mujibur Rahman, marking the birth centenary of the iconic leader, he added.

The academy has also set the theme of the fair as “Birth Centenary of Bangabandhu”. The Book Fair will be dedicated to Bangabandhu.

Like the previous years, the venue of the fair has been extended to the nearby Suhrawardy Udyan.

There will be strict security measures to avoid any untoward incident on the venue.

Publishers from across the country will come to the fair with a wide variety of books.

The fair will remain open from 3pm to 9pm from Sundays to Thursdays and from 11am to 9pm on Fridays and Saturdays.

On February 21, the fair will remain open from 8am to 9pm.