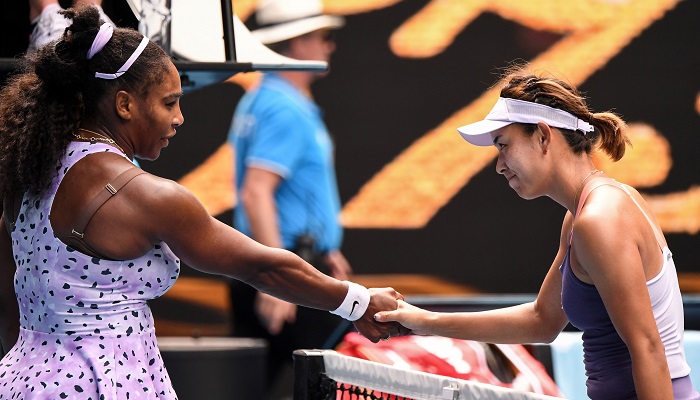 China's Wang Qiang (R) shakes hands with Serena Williams of the US after victory during their women's singles match on day five of the Australian Open tennis tournament in Melbourne on Friday. –AFP

Serena Williams was sensationally knocked out of the Australian Open third round by China's Wang Qiang on Friday, torpedoing her bid for a record-equalling 24th Grand Slam crown.

Williams, 38, was the bookies' favourite to win an eighth title at Melbourne Park but she came unstuck against a determined Wang, who took only one game off the American last time they met.

"After last time I did really hard work on and off court, I believed I could do it."

Her reward is a clash with Tunisia's Ons Jabeur, who upset Williams' close friend Caroline Wozniacki, sending the Dane into retirement.

Williams, seeded eight, started slowly against the fast, positive Wang, and she was three break points down in the ninth game when Wang punched away a forehand to grab the break.

Serving for the set, Wang won a full-blooded rally to bring up set point and then sealed it to go one set up -- a far cry from their last meeting in New York.

Williams came out firing for the second set but her chances plunged when she was broken to go 3-2 down, and it looked all over when she let Wang off the hook on break point in the eighth.

However, Wang wobbled when she was serving for the match and Williams won a titanic 24-shot rally to break the Chinese player for the first time, raising her arms in triumph.

Williams staved off more break points before dominating the tie-breaker, where she benefited from another net cord and a Hawk-Eye review before levelling the match with a service winner.

In the tense final set, both players held firm but Wang pounced when Williams was serving to stay in it, converting her third match point as the American netted.

Wang received a torrent of criticism from Chinese fans after her capitulation to Williams in the last eight at Flushing Meadows.

The 28-year-old from Tianjin has now achieved her deepest Australian Open run, after reaching the third round last year -- a prelude to her best Major performance, at the US Open.

AFP Sport highlights the American great's failed attempts at history since winning the Australian Open in 2017 while pregnant.

- Pulled out of her fourth-round clash with Maria Sharapova with a pectoral injury in her first Slam since having a baby.

- An error-strewn Williams defeated in the final by Angelique Kerber, 6-3, 6-3, the German's maiden Wimbledon title and third Grand Slam crown.

- Beaten 6-2, 6-4 by Japan's Naomi Osaka in a controversial and emotional final that left both players in tears.

- Squandered four match points and a 5-1 third-set lead against Karolina Pliskova to crash out in the quarter-finals 6-4, 4-6, 7-5.

- Upset in the third round 6-2, 7-5 by unseeded American Sofia Kenin, her worst Grand Slam exit since Wimbledon in 2014, when she fell at the same hurdle.

- Destroyed 6-2, 6-2 in just 56 minutes in the final by Simona Halep in perhaps the Romanian's finest performance.

- Toppled by teenager and 15th seed Bianca Andreescu in a rollercoaster 6-3, 7-5 final in a performance Williams called "inexcusable".