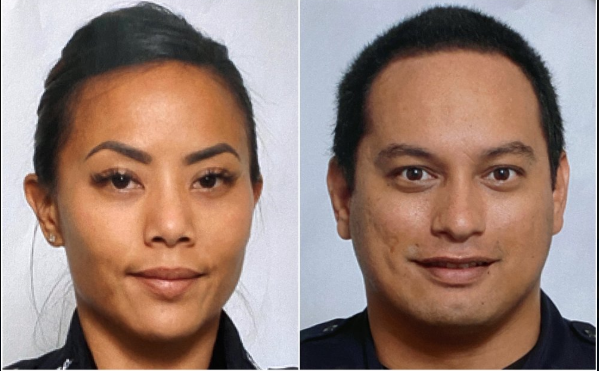 A Hawaii man with a history of run-ins with police and neighbors was facing eviction when he stabbed his landlord and killed two officers before the house he and two women were believed to be in burned, authorities and neighbors said Sunday.

Police responding to a call for help found a woman who had been stabbed in the leg and resident Jaroslav “Jerry” Hanel, in his 60s, opened fire, killing Officers Tiffany Enriquez, a seven-year veteran, and Kaulike Kalama, a nine-year veteran, Honolulu Police Chief Susan Ballard said. Police suspect he and two women were inside the house when it caught fire, and Ballard said it could take days for authorities to process evidence and recover any remains.

The fire spread to several other residences, destroying seven homes and leaving multiple others with fire or smoke damage, according to Honolulu fire officials.

The homeowner, Lois Cain, had recently sought to have Hanel evicted, court records showed. A neighbor told The Associated Press she saw Cain being loaded into an ambulance with knife wounds.

Cain’s condition was not immediately confirmed, nor was the suspect’s. Ballard said Hanel did not have any gun permits.

The normally peaceful neighborhood where shots were fired is at the far end of the Waikiki Beach between the Honolulu Zoo and the famed Diamond Head State Monument, a volcanic crater that looms above Honolulu and is popular with tourists and hikers. A regional park is also nearby.