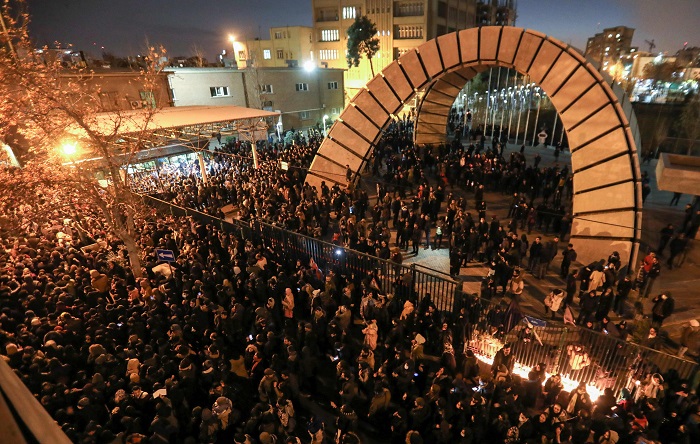 Iranians students demonstrate following a tribute for the victims of Ukraine International Airlines Boeing 737 in front of the Amirkabir University in the capital Tehran on Saturday night. –AFP

Anti-government protesters took to the streets of Iran Saturday after Tehran admitted that it mistakenly shot down a Ukrainian passenger jet, killing 176 people.

Thousands gathered outside the gates of Amir Kabir University, near the former US embassy in Tehran, to denounce the plane crash the government blamed on human error and "US adventurism."

In video posted on social media, protesters chanted for Supreme Leader Ayatollah Ali Khamenei to step down and for those responsible for downing the plane to be prosecuted. "Death to the dictator," some chanted.

In one video, demonstrators chanted, "Khamenei have shame. Leave the country."

A mass vigil commemorating the victims of the doomed flight escalated into an angry demonstration following the government admission, according to Iran's semiofficial FARS News Agency. University graduates migrating to Canada were among those who perished in the crash.

Their anger was fueled in large part by the nation's armed forces claim that it targeted the passenger plane unintentionally. It attributed the crash to radar activity and fear of US action.

"The Islamic Republic of Iran deeply regrets this disastrous mistake. My thoughts and prayers go to all the mourning families," President Hassan Rouhani said.

After the missile operation in Iraq, US military flights around Iranian borders increased and Iranian military officials reported seeing aerial targets coming toward strategic centers, according to a statement by Iranian armed forces headquarters.

"The aircraft came close to a sensitive IRGC military center at an altitude and flight condition that resembled hostile targeting. Under these circumstances, the aircraft was unintentionally hit, which unfortunately resulted in death of the many Iranian and foreign nationals," the statement reads.

The commander of Iran's Islamic Revolutionary Guard Corps Aerospace Force said he had requested all commercial flights in Iran be grounded until tensions cooled off.

But the Armed Forces and government and aviation authorities chose not to do so, Brigadier-General Amir-Ali Hajizadeh said at a news conference.

Hajizadeh said the plane was misidentified as a cruise missile by an air defense operator.

The operator was unable to contact the central air defense command to confirm it. He had 10 seconds to choose between shooting it down or not, Hajizadeh said.

Hajizadeh accepted responsibility, saying that once it became clear what had happened, he thought: "I wish I was dead."