Vitamin ‘A’ plus campaign on Saturday 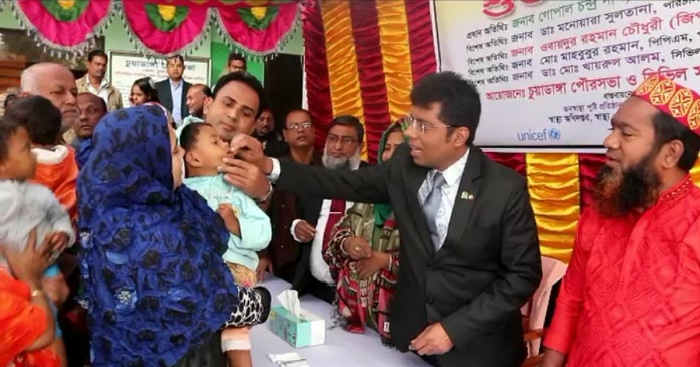 The national Vitamin ‘A’ plus campaign will be observed across Bangladesh on Saturday, aiming to feed Vitamin A plus capsules to 2.10crore children aged between six to 59 months.

Health minister Zahid Maleque came up with the information at a press briefing at the office of Directorate General of Health Services on Thursday.

Children aged between six to eleven months will be fed one blue color Vitamin-A capsule, while those aged between 12 to 59 months would be fed red colored capsules from 8am to 4pm on the day, he said.

They will be given Vitamin A capsule at some 1, 20,000 permanent and 20000 mobile health centres across the country.

Zahid Maleque also said that mobile health centres has been set up at bus stands, railway stations, launch terminals, airports, ferry terminals, bridge toll centres and kheya ghats which will remain open from 8am to 4pm to make sure that all children are fed the capsules.

The children of the remote areas under 240 unions in 42 upazilas of 12 districts will be fed the capsules in the next four days of the campaign day through conducting a search programme.

Besides, to make the campaign success, a total 2.80lakh volunteers have been trained. Control room will be opened in every upazila, district and all centres on the day for monitoring the campaign, he said.

The campaign in Gazipur City Corporation will be observed in January 25 instead on January 11 for Biswa Ijtema.