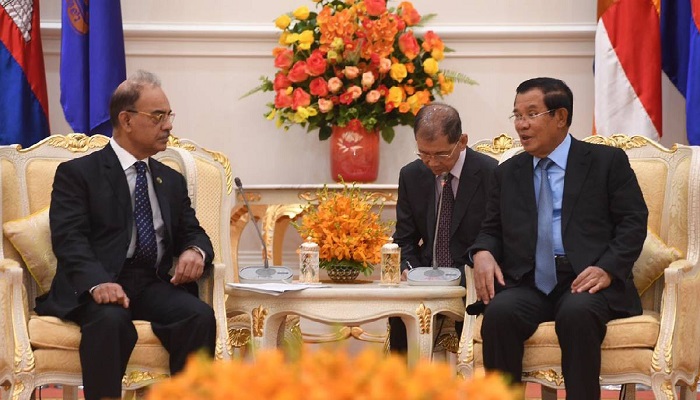 Cambodian Prime Minister Hun Sen has laid emphasis on a peaceful solution to the Rohingya crisis as Bangladesh seeks Cambodia’s support for early repatriation of the forcibly-displaced Myanmar nationals temporarily sheltered in Bangladesh.

He also highlighted the negative consequences of the prolong stay of these Rohingya people in Bangladesh and the Asean countries and beyond, according to the Ministry of Foreign Affairs here.

He sought support from Cambodia, an important member country of Asean, for early, safe and sustainable repatriation of Rohingya people.

The Cambodian Prime Minister mentioned that mutual naming of road in Phnom Pen and Dhaka after the Father of the Nation Bangabandhu Sheikh Mujibur Rahman and the late King Father of Cambodia Norodom Sihanouk would strengthen bilateral relationship between the two countries.

They also discussed other bilateral issues, including trade, agriculture and tourism.

Addressing Prime Minister Sheikh Hasina as his elder sister, Prime Minister Hun Sen referred to her visit to Cambodia in December 2017 and his visit to Bangladesh in June 2014, and mentioned that these two visits have taken the bilateral relations to a new height.

Faruk Khan mentioned that Bangladesh would organise events in Cambodia during ‘Mujib Year’ from March 2020 to March 2021, the birth centenary of Father of the Nation of Bangabandhu Sheikh Mujibur Rahman so that the people of Cambodia can learn more about the glorious life of Bangabandhu.

In all the meetings, Faruk Khan urged the Cambodian leaders to put pressure on Myanmar so that it takes its residents back.