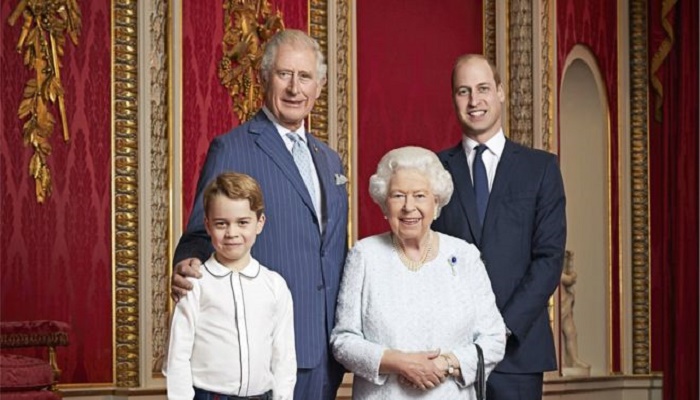 A portrait of the Queen Elizabeth with the next three heirs to the throne has been released to mark the start of the new decade.

It shows the Prince of Wales, the Duke of Cambridge and Prince George standing with the Queen at Buckingham Palace.

The new photograph was taken in the week before Christmas, but has not been published until now.

It is the second official portrait of the four generations of royals together.

The Queen, 93, standing at the front of her family, wears a white dress with a blue brooch and clutches a handbag.

Her son, Prince Charles, who is dressed in a pinstripe suit, stands on the first step behind her.

His arm rests on the shoulder of his six-year-old grandson, who is wearing a pair of green and navy tartan trousers.

Prince William, wearing a dark suit and navy tie, stands with his hands together to the right of his grandmother.

The photograph was taken by Ranald Mackechnie, who was also responsible for the only other portrait of the four royals together.

It was released in 2016 to mark the Queen's 90th birthday and was printed on commemorative stamps.

The latest portrait was taken on December 18 - the same day the four royals were photographed making a Christmas pudding together at the palace.

The moment, captured in front of a Christmas tree decorated with miniature corgis and crowns, featured in the Queen's Christmas Day message.