Man carries daughter, who was raped, on back to hospital for medical examination (Video) 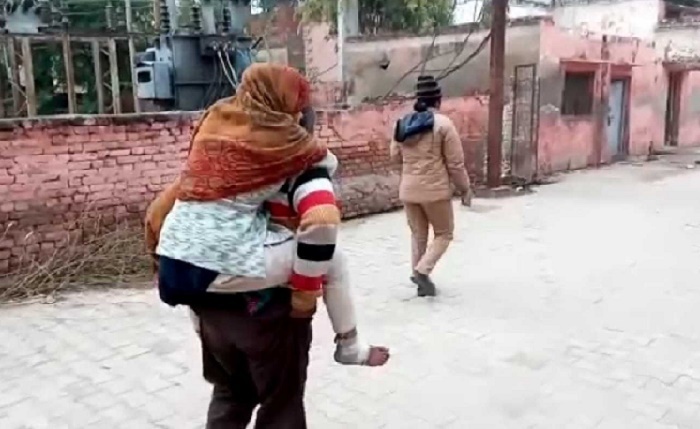 In the absence of a stretcher or wheelchair, a man in Etah of India’s Uttar Pradesh was found walking to a women’s hospital, carrying his teenage daughter on his back after she was allegedly raped by a youth from the neighbourhood.

A video of the incident, which was shot on Tuesday evening was widely shared on social media.

The 15-year-old girl, who was dragged into a room by her neighbour’s 19-year-old son, was raped for several hours and she broke her leg while trying to escape from the confinement.

Marhera station house officer Jitendra said, "An FIR was lodged on December 14. The next day, accused Ankit Yadav was arrested and sent to jail. The girl was sent for a medical examination."

According to local sources, after the rape survivor’s statement to magistrate, the 15-year-old girl was sent to government hospital for her medical examination. A woman constable was to accompany them. The three directly went to newly constructed ‘one stop centre’ for violence against women, which is located inside the premises of district hospital.

After completion of the formalities, the girl was to be taken to the women’s hospital. But in the absence of any stretcher or wheelchair, the survivor’s father had to carry her on his back.

When contacted, government authorities tried to pass the buck and nobody claimed responsibility.

"After the video, we conducted a probe and found that the newly constructed centre had no staff or amenities like stretcher or wheelchair to carry the girl to hospital. After the incident, I have asked the district probation officer who is incharge of ‘one step centre’ to write a letter to my office in order to avail stretchers and wheelchairs,” Dr Ajay Agrawal, chief medical officer of Etah said.

Etah DPO Abdul Kalam, however, denied his role. "The centre is under the charge of district social welfare officer Rashmi Yadav and she is the appropriate person to comment," he said.

When contacted, Rashmi Yadav claimed that she has yet not taken the charge of the one-stop centre.