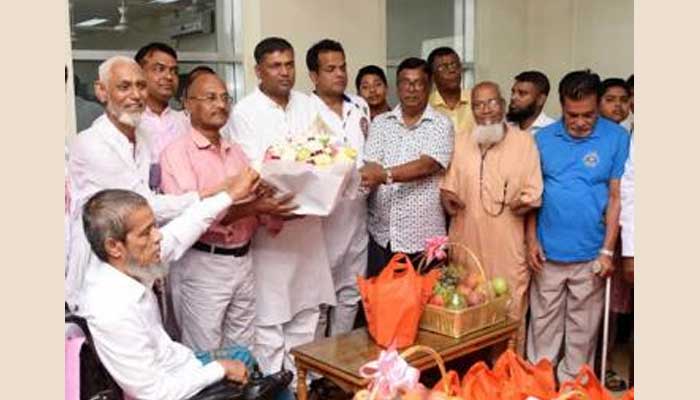 Prime Minister Sheikh Hasina on Monday greeted all Freedom Fighters (FFs) of the country on the occasion of the 49th Victory Day.

Like the previous years, the premier sent flowers, fruits and sweetmeats to the freedom fighters (FFs) at Martyred and War-wounded Freedom Fighters’ Rehabilitation Centre (Muktijoddha Tower-1) on Gaznavi Road at Mohammadpur in the city as a mark of her good wishes for them.

The Freedom Fighters thanked and expressed gratitude to the prime minister for remembering them on every national day and festival like the Independence Day, the Victory Day, Eid and Pahela Baishakh.

The nation is celebrating the 49th Victory Day today marking the most precious day when the country was liberated from the Pakistani occupation forces after a nine-month-long War of Liberation.

Forty-eight years back on December 16 in 1971, Bangladesh was born as an independent country under the leadership of Father of the Nation Bangabandhu Sheikh Mujibur Rahman and for the supreme sacrifice of three million martyrs and the honour of two lakh mothers and sisters.