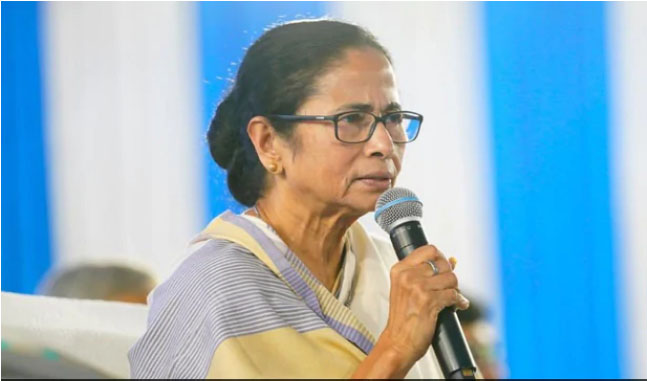 West Bengal Chief Minister Mamata Banerjee on Friday announced a series of rallies across the state to protest the contentious amended Citizenship Act reiterating that her state government will not allow the implementation of the law "under any circumstances".

The Citizen (Amendment) Bill has seen violent protests in the Northeast, particularly Assam, where two protesters were killed in police firing on Thursday evening.

"We will never allow NRC exercise and Citizenship Act in Bengal. We will not implement the amended Act, even though it has been passed in Parliament," Mamata Banerjee said, accusing the centre government of forcing non-BJP states to implement the law.

"The Citizenship Act will divide India. As long as we are in power, not a single person in the state will have to leave the country," the chief minister added.

Referring to Japanese Prime Minister Shinzo Abe's visit to Assam, which has now been postponed, Mamata said the development was a "blot" on the country's reputation. Abe was scheduled to visit India next week to attend a three-day summit with PM Modi in Guwahati, which has been engulfed in violent protests over the Citizenship (Amendment) Act.

The Act, which intends to make it easier for non-Muslim migrants from Bangladesh, Pakistan and Afghanistan to obtain Indian citizenship, has been accused by rights groups and opposition parties of being discriminatory and violating the constitutional right to equality.

Mamata Banerjee has been one of the staunchest critics of the Citizenship (Amendment) Bill and had voiced her opposition to the contentious Bill even before it was passed by the parliament on Wednesday.

"Don't be scared of this bill. We are with you, and as long as we are here, nobody can impose anything on you," she told a gathering in Kharagpur even as Union Home Minister Amit Shah was introducing the bill in the Lok Sabha.

The Bengal Chief Minister is also a vocal critic of the National Register of Citizens, which she claims is part of a well-planned exercise to target minorities in the country. Mamata has also found support from her counterparts in Kerala and Punjab who have termed it "unconstitutional".

Massive protests began in the Northeast even before the Citizenship bill was cleared by the parliament on Wednesday. The contentious Bill got Presidential assent on Thursday night.

Thousands of protesters have descended on the streets of Northeastern cities defying curfew even as Prime Minister Narendra Modi vowed that his government was committed to safeguarding their rights.

Several towns and cities were placed under indefinite curfew, including Guwahati, the epicentre of protests, besides Dibrugarh, Tezpur and Dhekiajuli.