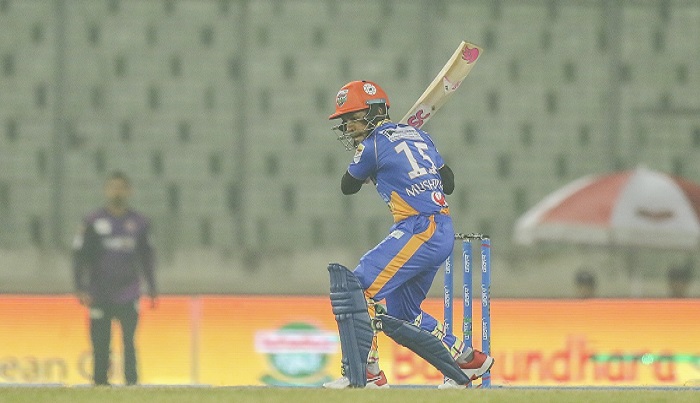 Afghanistan recruit Gurbaz smashed a marauding 19 ball-50 which was complemented by South African Rossouw’s 38 ball-64 not out as Khulna reached 146-2 in just 13.5 overs, overhauling Chattogram’s 144-6.

It was Chattogram’s first defeat after winning first match against Sylhet Thunder by five wickets.

In a bid to defend their 144, Chattogram got a good start when left-arm spinner Nasim Ahmed had opener Nazmul Hossain Shanto (4) stumped in the fourth ball of the innings.

The early fall of wicket didn’t dent the mood of Khulna as Gurbaz came up with whirlwind batting show to leave the bowlers in disarray state. He was particularly harsh on Muktar Ali who laughed the last once Gurbaz mishit one to give a catch to Kesrick Williams just after completing his half-century.

Gurbaz struck five sixes and four fours in a knock to hit the half-century in just 18 balls to become the second fastest half-centurion in BPL history. Pakistan’s Ahmed Shehzad remains the record holder of the feat with 16 ball-50 in BPL history.

After the dismissal of Gurbaz, Rossouw took the onus and sailed the side home, sharing a 72-run partnership with captain Mushfiqur Rahim in an undefeated third-wicket stand.

Rossouw smashed seven fours and two sixes in the knock. Mushfiqur Rahim was not out on 28 off 22, sending the ball across the rope for four times.

Being sent to bat first, Chattogram Challengers fell in trouble but recovered through Muktar Ali.

Lower order batsman Muktar Ali was the top-scorer for the side with 14 ball-29 not out, which featured with four sixes. Muktar’s flashy knock gave Chattogram 51 runs in the last five overs, taking them to closer 150, which looked unlikely after their top-order’s failure to convert their innings to big one.