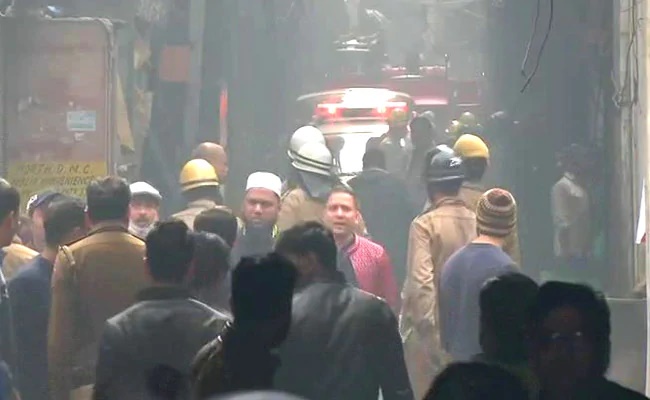 In one of the worst fire tragedies in Delhi, at least 43 people were killed and several others were injured when a blaze swept through a cardboard factory in a five-storey building in the capital’s Rani Jhansi Road early Sunday morning, police said. Rescue operations are underway.

As casualties mounted quickly, a team of National Disaster Response Force (NDRF) also arrived at the site of the fire to help in rescue operations.

The victims were moved to different hospitals where many of them were declared dead, police said. Many of the bodies have been charred and are yet to be identified.

Delhi Fire service director Atul Garg said the fire started around 5 am in a five storey building where around 60-70 people were sleeping, most of them contractual labourers and factory workers.

“The fire was big and we pressed in more than 50 fire tenders. Till 9.30 am we had shifted at least 56 people to hospital. All of them had fallen unconscious because of smoke. Our men got into the building and we pulled out occupants. They are in large number and were sleeping on different floors. Rescue operations are continuing and we are yet to figure out how many people were inside the building” said Garg.

The fire services director also said that they are yet to ascertain the reason behind fire. “Whether the building had fire fighting equipment is a matter of probe,” he said.

Prime Minister Narendra Modi described the fire as horrific. “The fire in Delhi’s Anaj Mandi on Rani Jhansi Road is extremely horrific. My thoughts are with those who lost their loved ones. Wishing the injured a quick recovery. Authorities are providing all possible assistance at the site of the tragedy,” he tweeted.

Dellhi’s food and civil supplies minister Imran Hussain said an investigation will be conducted and action will be taken against whoever is responsible for the fire, according to ANI.