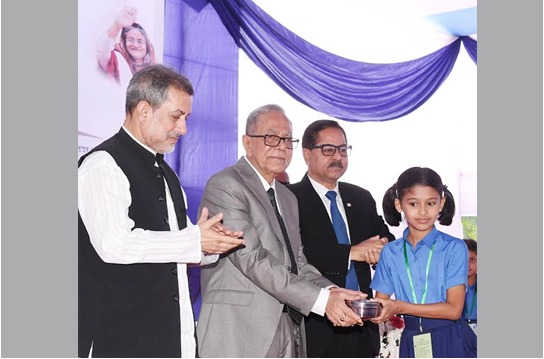 “I firmly believe that apart from the government’s initiative, if private organisations and affluent people in the society come forward with the midday meal programme, it would help enhance quality of primary education,” the President said while distributing tiffin boxes for the 182 primary schools of Raozan Upazila here.

As part of the ongoing midday meal programme in Raozan upazila’s schools, a total of 22, 260 tiffin boxes were distributed among the students.

Noting that the primary education is the main root of the education, he said, “So it’s very urgent to look after them specially their health, nutrition and recreation.”

The head of state thanked the local lawmaker and other concerned for initiating the programme, mentioning that the incumbent government led by Prime Minister Sheikh Hasina has given priority to the development of time-befitting primary education

Recalling his three-time visit-memories at Raozan earlier, he lauded the overall activities of the upazila saying, “I’m very much impressed.”

The President called upon all to assist the ongoing midday meal programme.

Local leaders, academic scholars, secretaries concerned to the President and senior civil and military officials were present on the occasion.