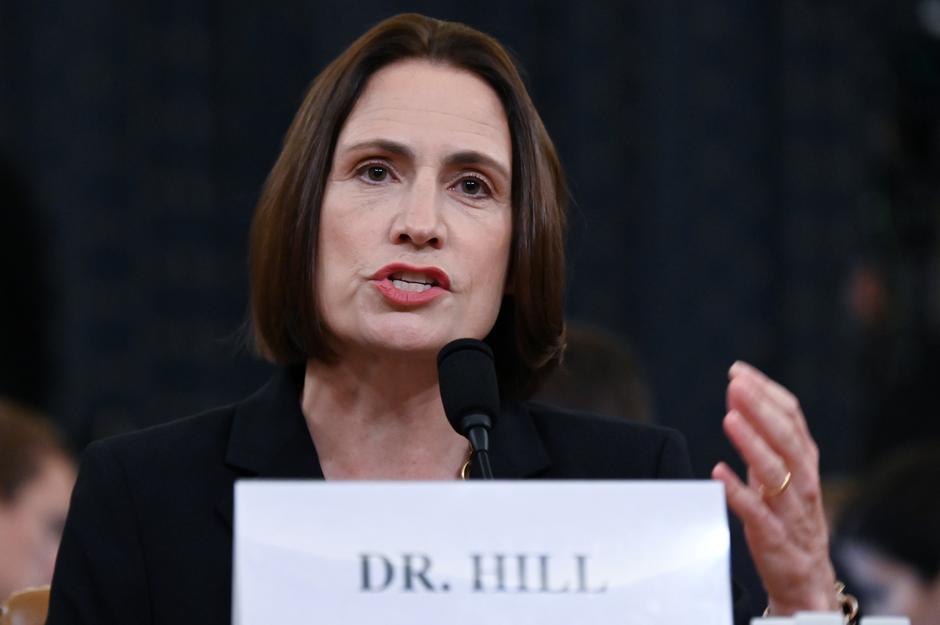 US President Donald Trump disregarded senior advisers and pushed a false theory that Ukraine meddled in the 2016 election, an ex-White House aide has told the impeachment inquiry.

Fiona Hill said the president had instead listened to the views of his personal lawyer, Rudy Giuliani.

Hill called the claims about Ukraine a "fictional narrative".

The inquiry is assessing if Mr Trump withheld aid to pressure Ukraine to investigate a political rival.

It is illegal in the US to seek foreign help to gain electoral advantage. Mr Trump denies any wrongdoing.

According to a discredited theory, it was Ukrainians or individuals with Ukrainian connections who interfered in the 2016 vote, rather than Russia.

In a phone call with the Ukrainian president, President Trump urged him to look into the claims as well as open an investigation into Joe Biden, one of the main Democratic presidential candidates.

Thursday is the fifth and last scheduled day of public hearings by the House Intelligence Committee.

What exactly did Fiona Hill say?

In her opening statement, Ms Hill - the former top Russia expert to the White House - accused other Republicans of sowing doubt about Russian interference in the 2016 elections.

"Based on questions and statements I have heard, some of you on this committee appear to believe that Russia and its security services did not conduct a campaign against our country - and that perhaps, somehow, for some reason, Ukraine did," she said.

She urged lawmakers not to promote "politically driven falsehoods" that cast doubt on Russia's interference in US elections.

"This is a fictional narrative that has been perpetrated and propagated by the Russian security services themselves," she said.

During Ms Hill's testimony, Democratic lawyer Daniel Goldman asked her: "So is it your understanding then that President Trump disregarded the advice of his senior officials about this theory and instead listened to Rudy Giuliani's views?"

"That appears to be the case, yes," she replied.

In her later testimony, she warned that Mr Giuliani had been making "explosive" and "incendiary" claims about Ukraine.

"He was clearly pushing forward issues and ideas that would, you know, probably come back to haunt us," she testified. "I think that's where we are today."

She testified that she had a couple of "testy encounters" with Gordon Sondland - the US ambassador to the EU who testified on Wednesday - over Ukraine, because Mr Sondland did not keep her informed of "all the meetings he was having".

But she later realised he "had a different remit".

"He was running a personal domestic political errand, we were concerned with national security", she said.