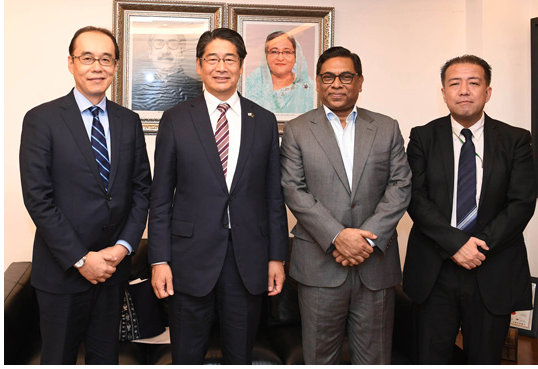 The Japanese ambassador evinced such interest when he made a courtesy call on State Minister for Power, Energy and Mineral Resources Nasrul Hamid at his secretariat office, said a ministry press release.

Expressing gratitude to the state minister for extending cooperation towards implementing the existing Japanese funded projects in the power and energy sector, Ito sought continued support from the state minister to work with joint efforts in the days to come.

Nasrul said with the passage of time, the bilateral relations between Bangladesh and Japan is deepening day by day.

Terming the Matarbari Power Plant Project as one of the guiding projects of the government, he said new townships would be built centering this plant suggesting that JICA could extend support for modernization works.

In this connection, the state minister sought earnest support from JICA on formulating town and village based mega plans, automation of the gas sector, formulating plans and appointing consultants for installing new gas lines, and undertaking integrated mega plan for the services sector.

The meeting was discussed about the possible areas of bilateral cooperation on modernization of the gas sector, new gas-lines, underground distribution system, LNG terminal, LPG terminal and training.

JICA Chief Representative Hitoshi Hirata, was present, among others, on the occasion.