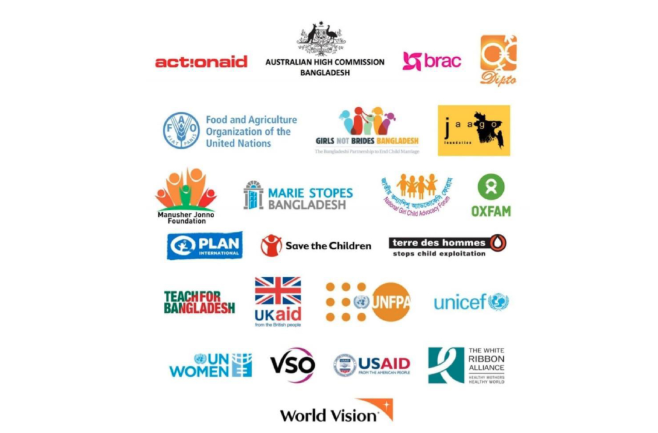 Development partners on Friday sought more opportunities for girls and empower them so that they can reach their full potentials.

They recognised that Bangladesh has made significant progress in improving the lives of adolescent girls over the last 20 years.

“We know that unlocking the potential of girls is critical in view of the demographic window of opportunity in Bangladesh and will generate substantial benefits not just for the girls themselves, but for their families and communities also,” reads a joint statement marking the International Day of Girl Child.

The theme of this year is - GirlForce: Unscripted and Unstoppable.

The development partners mentioned that more girls are enrolling in schools and accessing better healthcare than ever before.

The achievement in girls' secondary education has started to transform the social fabric and is providing girls with greater opportunities.

“Bangladeshi girls are inspiring, innovative and eager to take charge of their own future. They are using the internet and mobile technology to expand their learning opportunities and intensify their voices. 30.7 percent of girls (aged 15-19) own mobile phones,” the joint statement noted.

The girls are breaking barriers posed by gender stereotypes by becoming involved in outdoor sports, as demonstrated through the recent success of the Bangladeshi Girls’ U-15 football team.

Despite progress, significant challenges exist in many areas, said the joint statement.

While Bangladesh has done well on the maternal mortality indicator, data show that adolescent mothers between the ages of 15 and 19 are still twice as likely to die due to pregnancy and childbirth complications as women between the ages of 20 and 24, it said.

In education, according to the joint statement, there are fewer girls, compared to boys, in the higher secondary, post-secondary and tertiary level.

It said child marriage is a major cause of girls not enrolling in or dropping out of secondary education, with over half of women between the ages of 20 and 24 being married before their 18th birthday and almost one in five marrying before 15.

Violence against girls still poses significant challenges for Bangladesh and it has increased alarmingly in recent times, reads the joint statement.

According to Bangladesh Bureau of Statistics (BBS) 2015, 42.8 percent married girls (aged 15-19) are victims of physical or sexual violence.