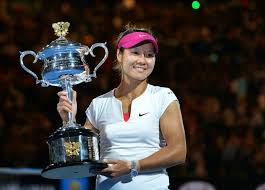 Li Na, who blazed a trail for a generation of women tennis players in China, says the country's men are now in desperate need of an inspirational role model.

Li sparked unprecedented interest in tennis across China after becoming Asia's first Grand Slam singles champion at 2011 French Open. She retired in 2014 after adding a second major at that year's Australian Open.

There are currently four Chinese women in the world's top 50. By contrast the country's top-ranked male, the unheralded Bai Yan, is 222nd on the ATP Tour rankings.

"I wish to see the men's side do well. That would be great," Li told reporters at the WTA Tour's Wuhan Open in her home city this week, where a special ceremony was held to celebrate her induction into the International Tennis Hall of Fame.

"I think for the men's side, they need one player to grow up and show everyone 'I can make it' and give confidence for other young athletes."

That could be a male version of herself, it was suggested. "Yes," Li smiled.

At the US Open earlier this month, Wang Qiang became the first Chinese player since Li in 2013 to reach the quarter-finals in New York and took the 27-year-old to a career-high ranking of 12.

"I think it's very good, now she's very close to the top 10, I'm looking forward to see that," said Li. "Also the WTA Finals are in Shenzhen for (the next) 10 years, that's a good chance for Chinese players."

Li retired from tennis at 32 and has had two children. She insists she is not tempted to make a comeback, despite the likes of Serena Williams and Victoria Azarenka enjoying success after childbirth.

Four-time Grand Slam champion and mum-of-three Kim Clijsters has just announced she will return to the tour next year, but Li said she wouldn't be emulating the Belgian.

"One hundred percent, staying home," said Li. "It's much easier, less pressure. At least at home you're doing something and nobody knows. But on the tennis court, if you smash your racquet, the whole world knows."

Li admitted she missed the "fight and the competition" but is happy to stay clear of the pressures of the tennis circuit and said she wouldn't push her children to take up sport.

"First you want to cultivate the interest in sports. When a child is sincerely interested in something, you don't even have to push them to do anything. If you're forcing them to do anything, the result will not be good," Li said.

"The truth is not everyone who plays tennis will make it to the very top of the pyramid.

"Playing sports, it's something that is a good platform to meet new friends, to get the good experiences of your life, to learn something in your life.

"Playing sport is a process of challenging yourself to improve. You don't have to compare yourself to others."