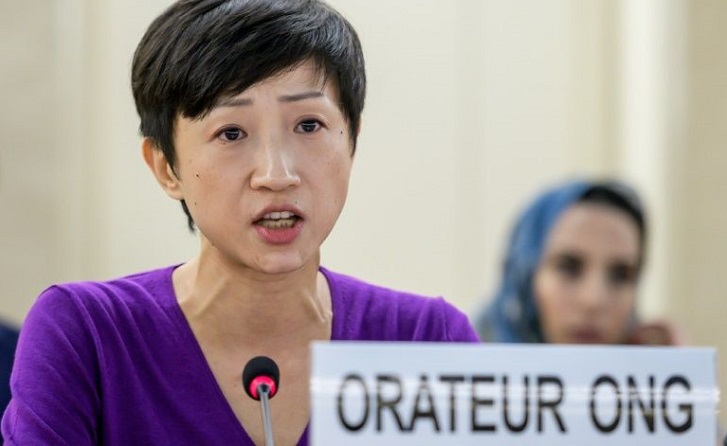 A Hong Kong lawmaker called Monday on the UN to launch an international investigation into a police crackdown on pro-democracy protests, voicing alarm at escalating "brutality".

"Hong Kong is on the verge of a humanitarian crisis," Tanya Chan told the United Nations Human Rights Council in Geneva, asking it to urgently discuss the situation and to dispatch investigators to probe abuses.

Chan, the founder of Hong Kong's pro-democracy Civic Party, was earlier this year handed a suspended eight-month jail sentence over her role in creating a civil disobedience campaign known as "Occupy Central" in 2013 and the student-led Umbrella Movement that brought parts of the city to a standstill a year later.

She was invited by the non-governmental organisation UN Watch to take its allotted spot and briefly address the council after more than three months of huge, sometimes violent rallies calling for greater democratic freedoms and police accountability.

Pointing out that she was speaking as Hong Kong on Monday entered its 100th day of protests, Chan cautioned that "there is no sign that police will exercise restraint".

"This is a result of the lack of democracy in Hong Kong, as the government is not held accountable for its endorsement of police abuse," she said, maintaining that police "call protesters cockroaches" and see violence against them as "acceptable pest control".

She urged UN rights chief Michelle Bachelet to "support our appeal for this council to convene an urgent session and to establish a mission of inquiry to ensure the human rights of the people of Hong Kong."

Bachelet has voiced measured concern over violence by all sides in Hong Kong and urged the authorities to conduct a "prompt, independent, impartial investigation" into alleged excessive force by police against protesters.

But so far, there is little sign that she or the rights council, which counts China among its 47 members, will back an international investigation.

The protest movement is the biggest challenge to China's rule since the city was handed back by Britain in 1997.

Under a deal signed with Britain, Hong Kong was allowed to keep its unique freedoms for 50 years.

But democracy activists accuse Beijing of reneging on those promises by tightening political control over the semi-autonomous territory and refusing calls for universal suffrage.

The pro-democracy movement has vowed to continue until key demands are met, including an inquiry into the police, an amnesty for those arrested, and universal suffrage.

Asked by AFP if she feared China might send in the army to end the protests, Chan said she did not think Beijing would see the need, since Hong Kong police "are actually doing their job for them".

"We are really worried about the situation, because there is obviously an escalation of police brutality," Chan told AFP.

"I am afraid that loss of life may happen if the escalation of brutality by police continues," she said.

Chan stressed the need to put an international spotlight on Hong Kong, especially in the run-up to the October 1 celebrations of the 70th anniversary of the founding of the People's Republic of China.