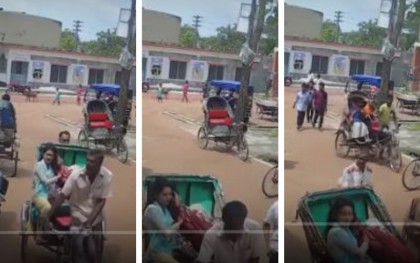 Another new video of the much-talked-about Rifat Sharif killing incident has revealed that Ayesha Siddiqua Minni, wife of the victim, herself took her husband to the Barguna General Hospital.

The video showed that Rifat Sharif was hacked in front of the Barguna Government College and his wife Ayesha Siddiqua took him to the hospital in a rickshaw.

According to the video, Ayesha herself took her blood-stained and unconscious husband Rifat Sharif to the emergency department of the hospital at 10:21 am on June 26 last.

An ambulance arrived in front of the hospital at 10:38 am. At that time, Rifat’s friend Manzurul Alam alias John and some of his friends came to the hospital. Manzurul talked to someone for some time over the phone. At 10:44 am, Rifat Sharif was taken to the ambulance on a stretcher while oxygen and two bags of saline were applied. The ambulance left the Barguna General Hospital premises at 10:49 am.

Sources at Barguna General Hospital informed that there are two separate CCTV cameras installed by the hospital authorities and district police in front of the hospital. But it was not confirmed yet which one of the cameras captured the video.