2nd edition of ‘My Golden Bengal’ launched in Belarus 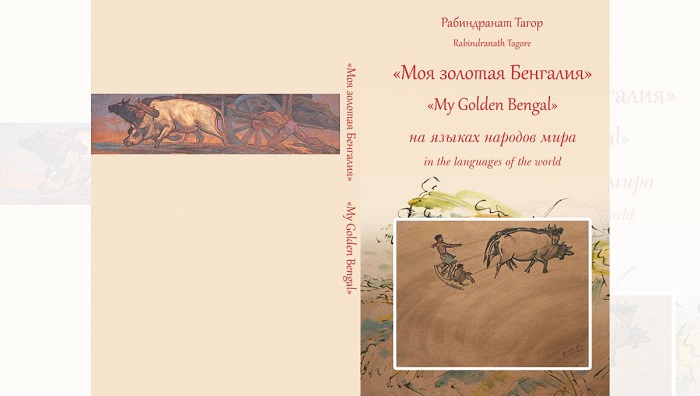 The second edition of a book containing the translations of Bangladesh’s national anthem in 50 languages was launched at the National History Museum in Minsk, Belarus, last week.

“My Golden Bengal – in the languages of the world” was published earlier this year by Yakub Kolas Printing House ahead of the International Mother Language Day, 2019.

Compared to the first edition, the number of translation languages has been expanded.

Bangladesh adopted the first 10 lines of Nobel Laureate Rabindranath Tagore’s ‘My Golden Bengal’ poem as its national anthem after independence.

The lyrics of the poem, which became the national anthem of Bangladesh many years after it was written, inspired not only Belarusian poets, but also writers from other countries to translate this poem into their native languages.

The poem has been translated in languages from English to Tabasaran, from Polish to Swahili. The compilers of this unusual book were Alexandr Karlukevich, the Minister of Information, and a member of the Union of Writers of Belarus, and Bangladeshi citizen Muzahidul Islam.

Famous poets, including Naum Halperovich and Mikola Metlitsky, made translations of Tagore’s poem into the Belarusian language.

“This publication is a kind of diplomatic cultural bridge between Belarus and Bangladesh,” said Alexander Karlukevich, according to a statement released Thursday.

Karlukevich paid special attention to the illustrations of artist Zainul Abedin in the book.

“This is a great artist, a classic of Bengal painting. A series of graphic works of the 1940s ‘Hunger in Bengal’, which are used as illustrations, reflect the history of the country, which has passed a difficult path to its own statehood,” Karlukevich said.

The Minister emphasised the importance of not only diplomatic and trade relations, but also cultural ties between the countries.

Karlukevich said the bilateral trade volume between Belarus and Bangladesh is about $140 million. “Our countries are closely cooperating. In addition, an event like the release of the book of Rabindranath Tagore on Belarusian soil brings our peoples even closer,” he said.

“Of course, it was very interesting but also difficult,” he said. “It was necessary to understand the psychology of people from different cultures who lived in another era, in another geographical area.”

He said he listened to the recordings many times, delved into the lines of Tagore. “Into their rhythm, it is difficult for me to assess my own contribution,” he said, adding that it is up to the readers to judge whether he managed to do a good job.

“In any case, I am glad that today these poems sound in the Belarusian language,” he said.

Representatives of diplomatic missions of India, Russia, China, Kazakhstan, Poland, Italy, who read the poem “My Golden Bengal” in their native languages, attended the presentation.

“What is nice is that it is a full-fledged publication with excellent graphic design. We also exhibit original works of Bangladeshi artists, used as illustrations, at easels. All translators are iconic authors; the book presents several versions of the Belarusian translation,” Pavel Sapotko, the director of the National Historical Museum, said about the second edition of the book.

The poems were translated by Republic of Belarus State Prize winner Alexander Ryazanov. The translations were conducted from English - London edition Gitanzhali (Song Offerings) in 1913.