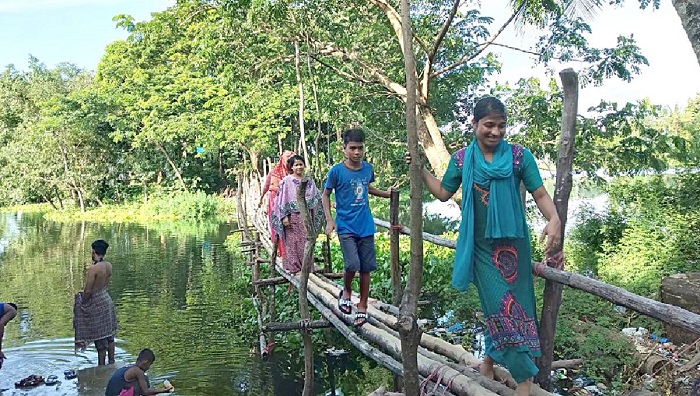 Life is a balancing act. Who knows it better than the residents of Majherbasti in Rangamati municipality! These people have to cross the Kaptai Lake using a ramshackle bamboo bridge for the last five decades as no move was taken to build a concrete bridge over the lake during those long years.

Locals said they have to rebuild the makeshift bamboo bridge spending Tk 10,000-15000 during monsoon almost every year as it turns rickety due to use by a large number of people.

Local people, including students and farmers, have to depend on the bamboo bridge as this is the lone means for reaching their different destinations. Ultimately, students and patients are the worst sufferers.

When water level in the lake falls during the dry season, people wade through mud to reach Tabalcharri Bazar, Reserve Bazar and Bonorupa Bazar, said the villagers.

They alleged that Ward No. 3 of Majherbasti Sadar police outpost area remained neglected since independence despite its close proximity to the town.

They said the people of the area cannot avail themselves of various government facilitates due to poor communication system.

Babul Shukla, a resident of the area, said patients who need immediate hospitalisation have to stay home because it is difficult to take them to hospitals through the risky bridge.

Urging the authorities concerned to build a concrete bridge in the area, Oli Ahmed, a resident of the area, said local people have to use boats for crossing the lake when reconstruction of the temporary bridge takes time.

Contacted, Rangamati Municipality Mayor Akbar Hossain Chowdhury said a concrete bridge will be built there next year, but he did not give further details.